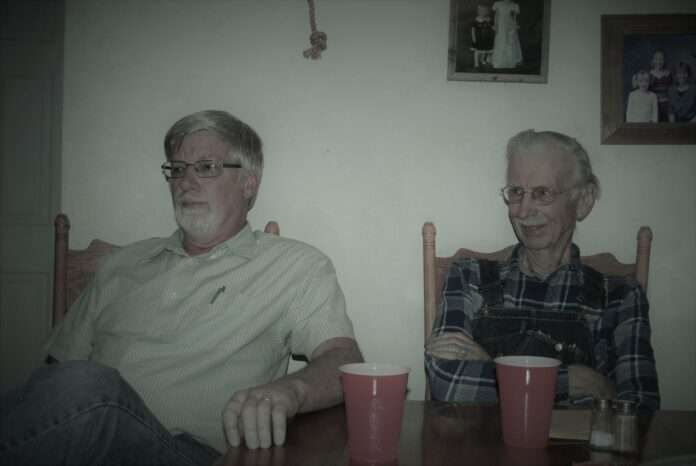 It was about this time several years ago, when our part of the country was bone-dry like today, that I took what was probably my last outdoor hike with our dad. I swooped him up at his retirement home apartment and we headed to the McPherson Valley Wetlands just outside Inman for a hike. The trails had recently been mowed making the walking easy, but I had to measure my steps so my long legs didn’t out-distance him. We stopped on the first rise and I pointed out all the marshes that were now dry and the ones that still held water.

Next, we meandered down into one dry pool along the trail where I had trapped muskrats last winter. We looked over a now flattened muskrat hut that had once seemed as big as a Volkswagen. We could still make out a muskrat trail in the mud that led from one big bunch of cattails to another. A little further, and we topped the dike along the drainage ditch that runs nearly a mile to the next road and drains all the marshes along the way, but was now so dry the ducks have to hitchhike down it. Just behind us, the drainage split as it made its way around a large grove of trees. The previous winter at that place there had been a long beaver dam that had since been demolished with heavy equipment. We stepped over the left-over rubble from that beaver dam and down into the dry drainage ditch. It was fascinating to think that the previous winter the water was deep enough where we stood that I hesitated to wade into it with chest waders. We found a beaver den or two dug into the bank deep in the bottom of the dry drainage. Bottles, tree limbs and strangely enough a bright yellow golf ball all lay in the mud waiting to be covered once again when the rain comes. The grove of trees harbors mammoth cottonwoods probably as old as dad and I together. We clamored up out of the dry ditch, meandered through the trees and onto the road that led us back to the truck.

More often than not, a person’s love of the outdoors, especially hunting and trapping is fostered by their father or a father figure in their young life. I’ve grown used to being an exception to most rules, which applies in this case as well. Don’t get me wrong, our dad loved the outdoors, but was never a hunter or trapper. My brother used to live on 200 acres of Ohio wilderness, and dad loved roaming the many trails that meandered through his place. The highlight of dad’s year was to be there at my brothers for the annual Gilliland family deer hunt that happened every November. Dad used to take me fishing when I was little; we’d walk to a couple ponds just up the road and catch bullheads and bass. I remember him taking me pheasant hunting one time, probably because I pestered him until he did. Other than that, he never took any of us hunting or trapping, I think because his dad didn’t hunt or trap and our dad just never got bitten by those bugs.

I firmly believe our families hunting “genes” came from our grandfather Hosafros (our mother’s father) who made many trips to Wyoming to hunt deer, elk and moose. In 1961 he harvested a moose that’s in the Boone and Crocket record book (records of American big game animals taken with firearms.) But my brother and I first hunted deer with a motley crew of neighbor guys where we lived in north-central Ohio; the Beck family, whose numbers no one ever really knew, and Dave Burt, a local cop who lived on the road behind our farm. We’d gather in Dave’s kitchen for coffee and hot cocoa, and inevitably someone would spot a deer crossing the road and the hunt was on. I remember how jealous I was when my brother, who’s 11 years my junior harvested his first deer before I did and, on my farm, no less. Today he’s still the better deer hunter.

Our love of trapping began when I was in junior high as an older man named Mr. Wolf allowed me to tag along when he checked traps he had on our land. He helped me put together a few ragtag traps and the following year I trapped in the creek that ran through our place. Later in high school I caught muskrats and the occasional mink in a pond dad had built and in local creeks, and snagged a few fox on land surrounding our place. When my brother was old enough and had also been bitten by the trapping bug, I gave him dad’s pond to trap where he also caught muskrats, mink and coon.

At 91, dad’s pace was noticeably slower when we took our hike, and I think he was glad he’d hauled along his favorite walkin’ stick. Yes, I used to wish dad had taken us kids hunting and trapping, but I’m just glad he still enjoyed nature. So even if you dad (or mom) is not a hunter or trapper, go snag them sometime and take them for a hike in God’s Creation and help them enjoy their twilight years Exploring Kansas Outdoors!
Steve can be contacted by email at [email protected]