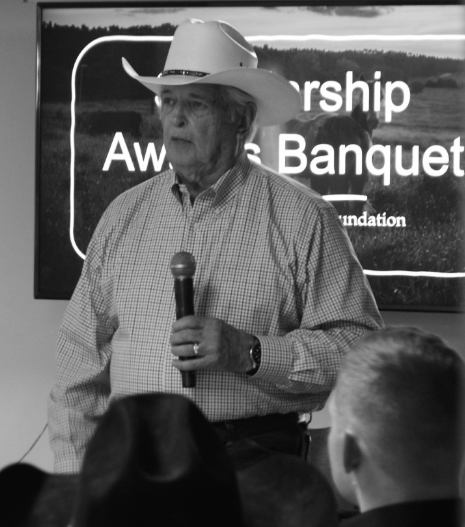 “If it weren’t for a great horse, women would be the greatest thing in the world.”

Smiles came over the group upon David C. Owen’s opening josh at the scholarship banquet of the Kansas Horse Council Foundation (KHCF).

While a leading public servant with diverse financial business successes, Owen has an inviable record as a professional rodeo cowboy.

“I have assisted several national government leaders, but knowing and working with cowboys tops them all,” Owen said.

“Their success is always dependent on a horse, such an important creature to us all,” Owen insisted.

World champion ropers were amply credited by Owen for his diverse achievements inside and outside the rodeo arena. “I learned from Junior Garrison, Willard Mooney, Shoat Webster, Sonny Worrell, the best ropers and best friends in the world.”

Friends of champion steer roper Clark McEntire, and his son professional roper Pake, Owen remembered their daughter-sister Reba before world fame. “Reba McEntire barrel raced and also sang the National Anthem at the American Royal when I was a director,” Owen said.

Being around those who have worked for renowned accomplishments creates personal inspiration. Owen pointed out success of his alma mater Ottawa University’s record as national women’s flag football champions.

“Perhaps nothing we do is more important for future generations than equipping leaders with servant leadership principles and a strong moral compass,” Owen insisted.

Experience is a training ground. “Even with natural abilities, everybody can become perfected through experiences,” Owen said. “That is with horses, partners, friends and throughout life.”

Honesty is essential in rodeo and everything people do. “Whether it’s a horse or business relations, one cannot progress without dealing completely honest with each other,” Owen said.

Even the best ropers don’t win every time. “Perseverance is always required to become a champion,” Owen said.

He quoted a matched roping between Willard Mooney and Roy Cooper. While Cooper won the competition, Mooney was just tenths-of-a-second behind having roped his calf with a second loop.

“Willard wasn’t about to let Roy win that match without giving his all,” Owen remembered. “Never ever give up in whatever you are trying to accomplish.”

To get to the highest level of arena accomplishments requires preparation. “It doesn’t matter how many times you’ve won before, every rodeo is a new competition,” Owen said.

“Junior Garrison never stopped practicing. “He worked to improve his dismount, how he threw the calf, his legwork and the tie,” Owen credited. “Little things can make a big difference between first and second.”

Working in a variety of partnerships during his life, Owen emphasized importance of the horse partnering with his rider. “Different horses fit cowboys differently,” Owen said. “There must be a working partnership between the cowboy and his horse, or they won’t win consistently.”

A roper’s competition is as much the calf he’s drawn to rope as the other cowboys entered in the rodeo. “Top ropers study the calves before they rope them,” Owen said. “They ask the other ropers, and if the calves haven’t been roped, they watch the calves’ actions behind the chutes.

“Always be prepared, know your competition the best you can,” Owen advised.

Patriotism is important to respect the freedoms provided in order to have rodeos. “National anthem sang before a rodeo can become quite emotional helping contestants and spectators appreciate these freedoms,” Owen said.

Everybody has their own unique qualities. “Never judge somebody because they are different,” Owen insisted. “Disabilities don’t exempt anybody from achieving a certain level of success.

“It’s not what happens but what you do about it that matters,” Owen continued. Time is like a river. You cannot touch the same water twice because the flow that has passed will never pass again. Enjoy every moment in your life.”

Answers to life’s queries will come from the Holy Spirit, according to Owen. “Listen for it and go for it.”