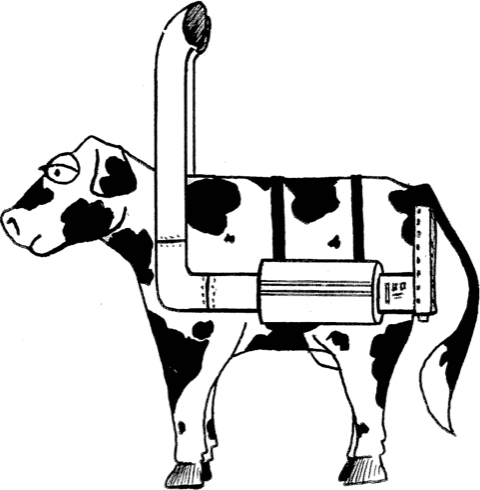 Folks, I’ve about had it with all the complaining by the tree huggers, media talking heads, and glory-seeking politicians about how methane gas from bovine “natural emissions” are a primal cause of global warming and climate change.

Well, to my way of thinking, the only way to shut them up is to solve the problem. So, I put my creative thinking hat on, hired some savvy cattle folks and some “get ‘er done” ag engineers, and some well-heeled investors and merchandising gurus and we’ve come up with the solution to bovine emissions.

I call it the COWTALYTIC CONVERTER. It’s pictured below in use. It’s not all that much different than the catalytic converters on your car or pickup truck. The methane emissions are captured at their source and directed through a chemical process that scrubs the emission clean and then vents it harmlessly and pristinely back into the atmosphere.

My team is gonna make a neat mint selling the Cowtalytic Converters all over the globe. And, the best thing is they are going to be bought by deep-pocketed governments and environmental funds, and not by the cattle owners.

COWTALYTIC CONVERTER
It’s a win-win. The environment gets improved at the same time that headers and heelers everywhere have a real job of roping the cattle and installing the Cowtalytic Converters.
***

Well, Mother Nature decided to just skip spring this year and jump directly from winter into summer. Two days ago, I mowed the dandelions while wearing longjohns and a stocking cap.

Today and yesterday, the temperature rocketed into the mid-90s and the humidity is about that high, too. It’s so humid out that you break into a sweat just from the effort of licking the roof of your mouth.

I got out early the last two mornings and harvested the last of my first crop of radishes. That’s one veggie that did wonderfully well in all the cool, damp weather we’ve had for the past two months. I got at least a gallon bucket of fresh French Breakfast and Icecycle radishes. I gave most of them away to friends and neighbors.

My first planting of spuds has emerged in a raised garden bed and the onion sets have popped up, too. Today, I planted the last of my spuds and a couple varieties of green beans. I still need to plant tomatos and peppers.
***

Ol’ Nevah and I keep making progress on our plans to downsize and re-locate. We struck good water on our 1.8 acre lot and finally closed on the property. Now, we’re working regularly with our new home builder to get the plans finalized, so he can give us our initial cost estimates.
***

Sadly, I lost another good neighbor recently. “Tex” was significantly younger than me which made is doubly sad. However, his memorial service was one to remember — and share with others.

It wuz held in the Flint Hills Rodeo arena in Strong City. When I arrived, the loud speakers were blaring a hot Alan Jackson western tune. The memorial itself wuz western to the core — a riderless horse, fine eulogies, thoughtful country music by Garth Brooks and The Judds and some local talents.

As the grand finale, an ugly, black, ill-tempered Brahman bucking bull was turned into the arena and cleared it out. He just stood and pawed the ground as the big crowd looked on. I know “Tex” wuz looking down and chuckling to himself at the spectacle.
RIP, good neighbor.
***

Guess that takes care of this column. Until next week, remember these words of wisdom: “If you can’t think of a word, say, ‘I forgot the English word for it.’ That way people will think you’re bilingual instead of an idiot.”
Have a good ‘un. 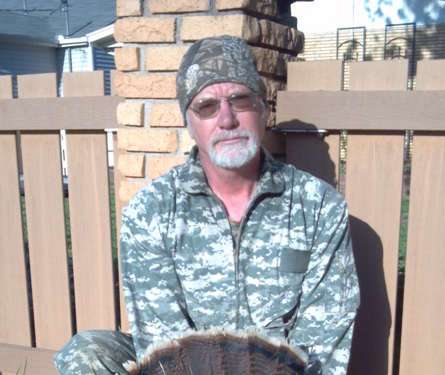