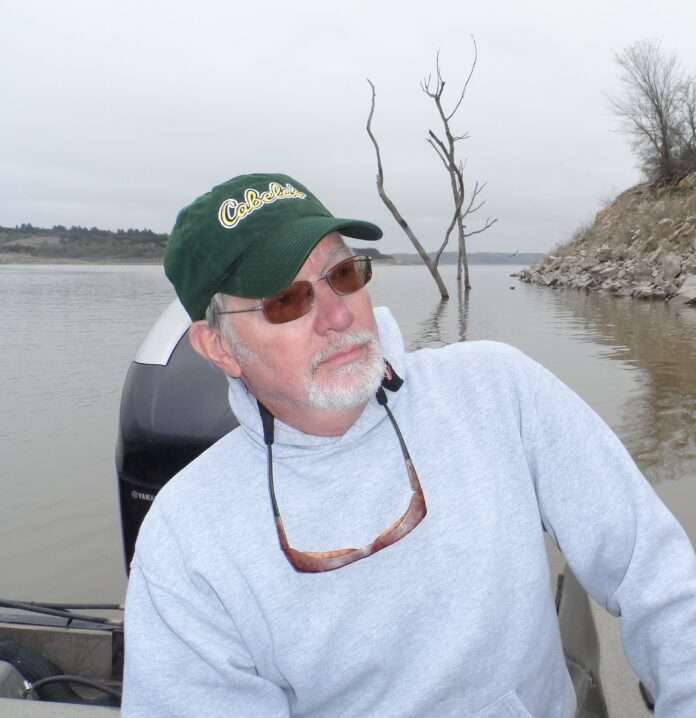 Do you ever contemplate the things you’ve done that leave you wondering why you weren’t killed doing them? One such incident always comes to my mind this time of year.

Maybe I enjoy setting lines for catfish because it reminds me of trapping, which is my passion. Or, maybe I just like fresh catfish. Anyway, many years ago shortly after moving to Kansas, I went with my brother-in-law and some of his buddies to set bank lines for catfish on the Smoky Hill River near the little town of Bridgeport. It was to be an overnight trip, and we camped in an alfalfa field near the river. The “smokey” was very high due to recent heavy rains to our north. The big channel and flathead catfish hide and wait for prey in deep holes around bends and beneath banks, and high water brings them out to move around, so “bank liners” relish these occasional times of high water during the dog days of summer.

The plan was to set and bait lines late in the evening, then to check them around midnight and again at first light. One of the guys had borrowed an outboard motor and a small aluminum boat, which barely held the five of us with lines, bait, etc. As high and swift as the river was running, the boat and motor were necessary as well as convenient.
As we set the lines, we looked for the aforementioned deep holes near the bank or under logs, with a tree limb or log on which to fasten a line. The lines were made of heavy cord like trotline, with large hooks tied onto one end. They were baited with live goldfish, lowered to the bottom, then tied onto a green springy branch or fastened with a rubber bungee cord to help keep a large fish from pulling the hook from its mouth. By nightfall, several lines were set and baited, and the plan was on schedule.

Around midnight, after numerous camp-fire roasted hotdogs and a little sleep, we fishermen piled into our tiny yacht and set off to check the lines, which were all downstream from camp. We motored beyond the farthest line, then turned and began to travel upstream against the current, but the boat soon stopped moving forward and started drifting backwards with the raging river. Someone grabbed the first passing limb and held on while the guy with the headlamp climbed to the back of the boat, jostling and rocking the tiny craft as he went. The motor was tilted from the water and inspected, but after finding nothing wrong, it was lowered into the water for another try and we were soon moving forward again. After a short distance, the problem reoccurred, this time with a much different outcome. As the motor was tilted from the water, an expletive or two informed us that the propeller, a major component in our forward movement, was missing from the motor. Our only option was to drift with the river until we reached a road where the boat could be beached and later retrieved by pickup. The night was still and very dark, and it was a quiet ride in more ways than one. Our man with the light was in front of the boat, and we could see raccoon eyes and other eerie sights as he panned back and forth along the bank. A heron scared the tar out of us all as it rose from the water just ahead. Finally, the boat was beached beneath a bridge and retrieved by pickup after a long walk back to camp. The night had been an experience, but the real adventure, checking the lines on a boiling river with no motor, awaited us at first light.

As I remember, morning seemed to come earlier than most, and was clear, hot and steamy. The plan was to launch the boat upstream somewhere beyond the farthest line, then attempt to reach each one as we steamed past with the current. With either the bravery of crusaders or the ignorance of youth, we were soon off and bouncing on the rolling river. The fellow with the sharpest eyes was up front, and as he saw each bank line approaching, the rest of us paddled madly like Nordic warriors to reach shore. Someone would grab hold of anything available and attempt to hold the boat, while the line was checked and retrieved, then the “anchorman” would release us to be swept on to the next one. The closest call came in the form of a huge cottonwood tree, totally intact with green leaves and all, lying across the river ahead. Despite our valiant paddling, the current sent us squarely through the middle of the tree, and as forward movement ceased, the seething river snapped the boat sideways and began to roll it over. We must have looked like monkeys in a mango tree as we all scrambled to break branches and get our little war canoe righted again! Then again, whether by bravery or by ignorance, we were soon free and moving. Huck Finn would have been proud! The rest of the trip must have been reasonably docile, because the next memories I have are all about helping clean several nice channel cats and a couple respectable flathead catfish.

I’m pretty sure all of us can look back today and agree that this adventure was ill advised. Someone has said, “A good scare is worth more to a man than good advice.” Today, I would opt for the good advice. But back then those thoughts were probably trumped by each bite of fresh catfish…Continue to Explore Kansas Outdoors.