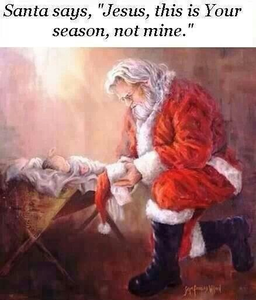 Twas the night before Christmas and except for that mouse
Not a creature was stirring cause’ we were locked in the house.

The villain called COVID had come here to reign
It’s imprisoned our senses and numbed all our brains.

But deer season was here and my freezer was bare
So, I snuck out the back so no one was aware.

It was just before dark as I climbed into my seat
Overlooking a woodlot and a field of new wheat.

Then out in the wheatfield there arose such a clatter
I sprang from my seat and I fell down the ladder.

I guess I clobbered my head when I fell to the ground
Cause” what looked like reindeer were roaming around.

“Merry Christmas to me” I though in my mind
Reindeer meat in my freezer will suit me just fine.

But as the fog in my head cleared, I thought “What’s the chances”
A field full of reindeer in the middle of Kansas?

I shouldered my rifle but the target I chose
Appeared to have bells on and strange looking nose.

It looked funny and shiny and about to explode
In fact, if you’d seen it, you might even say it glowed.

Then out from behind them stepped a man dressed in red
And he fell to his knees in what looked like a sled.

He was visibly shaken and a tear wet his cheek
As he turned around towards me and he started to speak.

“This once was my favorite night of the year
I looked forward to spreading good will and good cheer.

But now all seems muddled, nothing is clear
And the world has gone crazy and seems helpless with fear.

The naughty and nice list is just an offender
Cause’ some kids today even question their gender.

Aunt Jemima got cancelled and Dr Suess had to flee
Some schools can’t call kids a “he” or a “she.”

And reindeer gas causes more grief
Than the homeless among us that live on the street.

We’ve had to invent a new name for the elves
Now I must call them “small workers with bells.”

Wood for the workshop and new paint for the sleigh
Are all on some big ship out in some bay.

And costs have gone up and continue to soar
To the point we can hardly make toys anymore.”

“But the saddest illusion that some people utter
Is that Christmas can’t happen because of this clutter.

Now you know I am Santa he said with a sniffle
But Christmas is Jesus, that plain and that simple.”

He climbed into his sleigh and to his team gave a whistle
And away they all flew like the down of a thistle.

And I heard him exclaim as they flew out of sight
“Keep Christ in Christmas and to all a good night.”

So, in the absence of reindeer meat in my dish
Guess I’ll just have a salad and a nice piece of fish.

The Fix-It Man (Best Of)