Home Blogs Why do fish die in the winter?

Why do fish die in the winter?

What causes fish to die in the winter?
-Information about what happens to fish and ponds under the ice.

The ice is now officially off of the area lakes and ponds and my email and voice mail boxes have been filling up with questions and reports about fish kills. This year was absolutely brutal on the fish, perhaps one of the worst winters of my life, at least that I can remember. I am going to spend a few minutes just explaining what goes on under the ice in the winter time. Also I will try to answer some of the most frequently asked wintertime pond questions about fish, water temps, turnover, snow cover, sunlight, aeration, oxygen, and ice fishing. I guess I will just start at the beginning with fall turnover and just keep rolling somewhat sequentially as thoughts and topics occur.

During that fall turning over process, there is a large amount of gases and foul odors and such that have been trapped down in the bottom water all summer. Those gases sometimes even become more prevalent than dissolved oxygen down there. Once that water from the bottom is exposed to the surface, those gases and odors are finally released into the air and that stagnant water becomes saturated with oxygen again. Sometimes when this turnover happens too rapidly some fish actually can die. A rapid turnover with low oxygenated bottom water can actually suffocate fish.

Fast forward a few weeks into the winter months and the air temps start dropping below the freezing point. Once the surface water cools down to 32 degrees it starts to form a layer of ice. Just below the ice, the water temps will be 32 degrees. As you start going deeper the water temps actually start gradually warming up to 39 degrees at the bottom. For some reason water is the most dense at 39 degrees so that figuratively speaking warm water stays put down there all winter long. The ice that is formed at the top of a pond is actually a very good insulator during the coldest days of the season. However that same ice can become a very bad thing for the pond as well. Let me explain.

First the good. Ice insulates the pond from sub-zero temperatures and keeps the pond water from getting colder than 32 degrees. If a pond didn’t have its ice for insulation during prolonged cold temperatures, the water in the pond would get too cold for fish to survive most winters. Water in the lower 30’s will start stressing most Midwestern gamefish, and water in the upper 20’s will kill em dead. Now would be a great spot to talk about winter time aeration and keeping open water, but first I want to talk a bit more about the pros and cons of winter time ice.

Ice is great for insulation and it isn’t really a bad thing for ponds and fish at all until snow starts building up on it. Sunlight is the lifeline to the entire pond. Every living thing in the pond needs oxygen to live and even during the winter there are living plants and plankton performing the oxygen producing photosynthesis process. Cold water does hold higher concentrations of dissolved oxygen than warmer water, but if the sunlight is completely blocked from reaching the pond the oxygen will eventually run out. As plants and plankton begin to die they start using up oxygen as opposed to giving it off. Your imagination can complete what happens next as a pond starts using up oxygen as opposed to producing it. Ponds with lots of decaying vegetation will run out of oxygen in low light situations much faster than ponds without much vegetation.

Now is my chance to tie in a bit of fishing into this mix. I spend the entire winter outside taking folks ice fishing. At first safe ice, ponds are still very much alive and full of oxygen and active fish typically are very easy to find and catch. Here is an early season photo at Pfeiffer pond down in Southern Illinois. I spent a day teaching them all of my ice fishing secrets and they caught on real quick and had a great dinner that evening! 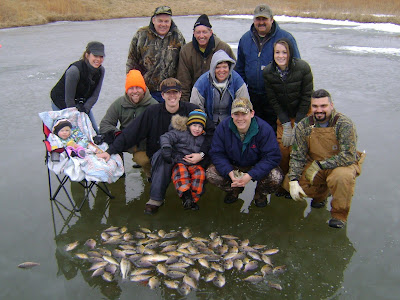 The ‘first ice’ period usually lasts for a couple weeks, but then things start to really change as we start getting snow sitting on the ice. It only takes a few inches of snow and then the fishing gets much tougher. That’s when I need to start finding the most oxygenated places in the ponds to find the active fish. Yep, I actually have a dissolved oxygen meter that I take ice fishing among other gizmos and electronic gadgets. My meter reads the oxygen saturation down to 25 feet deep. Then moving along as the winter progresses there are certain ponds and lakes I don’t even bother fishing at all. If oxygen is below 5 ppm, fish will start to become very inactive, and when it gets down to 2 ppm big fish will actually start to die. When fish become stressed they are nearly impossible to catch in the lips. Shallow, weedy unaerated ponds tend to be very good ice fishing in the beginning of the season, but nearly impossible to catch fish in towards the end of the season.

So now that I’m done with my little fishing application, here are a few things to do to help your pond and fish make it through a long snowy winter. We all are rapidly learning about the benefits of summer time aeration systems, but few people know how to properly use their aerations systems in the winter. During the summer it is usually recommended to run your aerator in your deepest water centrally located in order to efficiently circulate the most amount of water. In the winter time though, you absolutely do not want to run your aerator in the deepest portion of your pond. Pushing the warmest water in your pond up to the subfreezing air temps at the surface can supercool your water. Doing this directly doesn’t kill your fish too often, but if they have no warm 39 degree water to sanctuary in they will become stressed over the course of the winter, and especially during those few arctic cold nights. Stressed fish will oftentimes get really red lips and will become very susceptible to parasites, disease, and fungus. 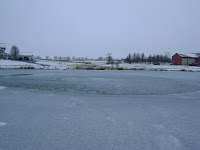 I recommend aerating deep in the summer and shallow in the winter. Usually I like to aerate in about 8 feet of water during the winter. This keeps a nice sized whole of open water, while not mixing the warmest bottom water of the pond with the super cold air temps. Usually I will just run a separate airline on a splitter from the compressor to a shallower diffuser. Then I just flip the deep one off and the shallow one on and vice versa in the spring. For those without an aeration system I suggest shoveling the snow off of your pond as much as possible. Just clearing a few rows in strips across the pond is often enough to let adequate sunlight in. Last suggestion would be to remove as much vegetation and leaves as possible going into winter. Decaying matter eats up precious oxygen under the ice.
Keeping your fish well oxygenated and happy throughout the winter is a big key to growing them big and healthy! It takes the right combination of food, water, and shelter to consistently grow and maintain populations of large fish, but the absolute first step is to maintain the best water quality possible 24/7 365 days per year. It only takes about 15 minutes of no oxygen to kill the biggest fish in your pond (yep, they die first), and It only takes a couple weeks of low oxygen stressful conditions to seriously inhibit growth potential and overall health. As fish populations grow larger, they become way more susceptible to winter and summer fish kills. Many ponds will kill off in about an 8-10 year cycle and a lot of that has to due with the fish populations growing too large in that span of time for a pond to support through a harsh winter or summer. After all this rambling, the answer to the question of what causes fish to die in the winter is simple: they either suffocate to death, or they end up on my dinner plate. Both of these causes of death will end the life of thousands of fish every winter.
Here is a photo of a delicious winter fish kill. This is the kind of winter fish kill that I actually welcome and spend all year managing for. 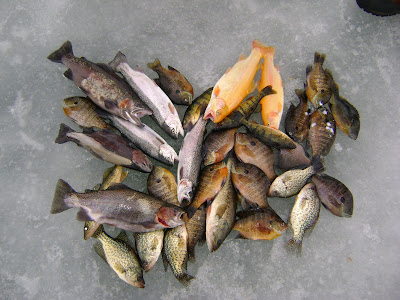 Tags: Why do fish die in the winter?