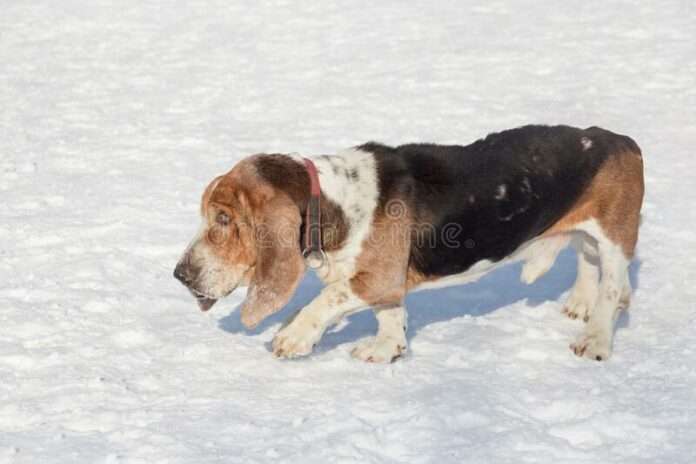 As haying time nears again, my mind wanders (which it does quite well) back to the days when baling hay was a rite-of-passage for country boys. One particular story about a neighborhood curmudgeon, his mindless dog and a woodchuck, is as fresh in my wandering mind as if it happened yesterday. Enjoy Wimpy and the Woodchuck.

Once upon a time, when men were men, boys were boys and hay bales were still hay bales and not huge, immense rolls of grass, my summer income came from the same source as all other high school boys from my era; baling hay. We’re talking wagon load after wagon load of over 100 square bales apiece, loaded on wagons pulled behind the baler, taken to the barn, unloaded onto an elevator and stacked into the loft. Remember that? The farm boys in our neighborhood were the usual ornery, free-spirited lot, but we all knew how to work hard, (remember that too?) and come hayin’ time each year we became more valuable to local farmers than 4 legged chickens. Such was the case with Chester Campbell. “Chet” as he was known, lived across the road from me, and for reasons unknown, didn’t seem to care much for us neighborhood boys. The feelings were mutual, but like I said, once his hay was down, we became angels with hay hooks.

Ohio has groundhogs like Kansas has coyotes; wherever there is ground there are groundhogs. Groundhogs, like Punxsutawney Phil, best known as woodchucks, look like overgrown prairie dogs, short stumpy tail and all, and can easily grow to weigh ten pounds or more (and rumor has it they do taste just like chicken.) They have two sharp incisor teeth in the front of their mouth, much like a beaver, and eat all types of green plant life. They dig their burrows in fence rows and woodlots where they can easily sneak out into fields of young growing crops and wreak havoc. Like mini combines they choose a row of tender young soybean plants, straddle the row and eat every plant off to the ground for several feet.

We had a dog named “Silly” who was a groundhog slayin’ machine. A groundhog can give a nasty bite, but Silly knew just how and where to grab them, and would shake them till those giant incisor teeth rattled. One day we heard a huge ruckus coming from the cornfield by the house. Upon investigation, it was Silly who had caught a groundhog, probably sneaking through the cornfield on its way back to the safety of its den (or so it thought.) When the fight was over, Silly was victorious as usual, the groundhog was dead and a patch of corn the size of a pickup was flattened from the fray.

Now, old man Campbell, the teenage-boy-hating neighbor across the road had a dog named Wimpy. As I remember Wimpy sort of looked like a cross between a beagle, a basset and a sack of potatoes, and was a good old dog, just not the sharpest knife in the drawer, and had probably never seen a groundhog, let alone know how to safely kill one. This particular day, Campbell’s hay was ready to bale, and, as usual, three of us neighbor boys suddenly became handier to him than sliced bread! The hay field was bordered by a creek on one side and by woods on one end, and those borders were riddled with woodchuck dens.

Empty wagons were pulled behind the baler, and when one was loaded, ole’ man Campbell would stop long enough for one of us minions to unhook the loaded wagon, hook up to the empty wagon behind us and off we’d go again. In the middle of one such exchange, we heard the most awful wailing, screeching and thrashing imaginable, like Beelzebub himself had come a-callin’ coming from the nearby field edge. The three of us kids ran to investigate and found Wimpy in the weeds with a big groundhog stuck-like-chuck to the end of his snout! Around and around they went, the woodchuck showing no intentions of letting go. We all knew better than to try and interrupt the festivities barehanded, so we scrambled to find something to end the brawl and save Wimpy’s snout. The back of all the hay wagons had metal “pockets” welded to them into which wooden racks could be inserted to provide something solid to stack the back row of hay bales against. One wagon happened to have just single 2×4’s in those pockets, so someone grabbed one and ran back to the brawl. After taking careful aim amidst the ball of thrashing fur, a well-placed wallop across the groundhogs back dropped it to the ground and sent it diving for its burrow minus Wimpy, who raced shrieking toward the house. So ended Wimpys close encounter with the woodchuck, and I sincerely doubt he ever saw one that close again.

Thankfully we don’t seem to have groundhogs (woodchucks) in this part of Kansas so this story would not be repeated here. But I have heard numerous stories of coyotes attempting to draw dogs across a field and into cover where I’m sure there were other coyotes lying-in-wait. I have to think every teenage boy alive today would benefit greatly from a summer or two of loading and unloading square hay bales, whether-or-not they ever freed Wimpy from a woodchuck.