When Dan and Shirley Power decided to move to a larger property in Reno County, they were dismayed to learn the menagerie of animals at their longtime home couldn’t go with them.

That included Norman, a 15-year-old hand-raised American bison that the Powers adopted when he was 9 months old from Hedrick’s Exotic Animal Farm outside of Nickerson.

“We had breakfast together every morning,” Dan Power said this week as he visited Norman at the Hutchinson Zoo where he now resides, bringing him a couple of Jonathan apples. 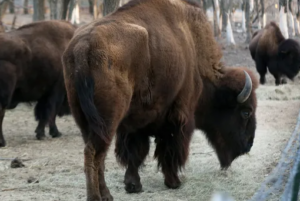 Wearing a knit hat woven from Norman’s fleece, Power reached across the simple wire fence that encloses the herd to give Norman’s shaggy head a scratch, mindful of his sharp horns as the animal consumed the fruit in a few brief chomps.

While Norman joined an existing bison herd at the zoo, the animals are on the opposite side of a retention pond, well removed from the public. That makes viewing and any possible interaction difficult at best.

A longtime supporter of Hutchinson Friends of the Zoo, after delivering Norman to the zoo last September, Power expressed interest in creating a new bison viewing experience that could also offer an opportunity to feed the animals, said Parks and Recreation Director Justin Combs.

The city contracted with Professional Engineering Consultants of Wichita to design an exhibit. It will include new walkways, taking the public to the north side of the pond and a steel fencing system, which staff can open and close to allow some interaction with the animals by staff and the public — if appropriate staff are available.

The PEC design includes a raised wooden walkway that cuts across the corner of the pond, making the area accessible even at times of high water, as well as a longer concrete sidewalk circling on the east side. That route will also take zoo visitors closer to the existing pronghorn and whitetail exhibit on the east side of the pond.

It also includes decorative concrete benches constructed in a semi-circle in front of the bison pen and the option to add a paddleboat dock and ramp on the pond, which is a groundwater pond that goes up and down with changing groundwater levels.

Relocating the existing fence further south will slightly enlarge the bison grazing area, which is shy of 10 acres, said Zoo Director Nicole Mantz. An 8-foot-high chain link fence will replace most of the existing fencing, allowing deer and pronghorn to be potentially housed there in the future.

The steel portion of fencing will enable opening part of it at the top for feeding the animals, and an area at the bottom where zoo staff will attempt to train the bison to allow hoof care without having to go inside the enclosure.

After receiving cost estimates from the designer, the Powers pledged to cover $103,000 of the estimated $171,000-plus project, Combs said, with Friends of the Zoo agreeing to pick up the remainder through a two-year capital campaign.

The primary cost drivers are the wood for the walkway and concrete for the sidewalks, Combs told the Hutchison City Council before it voted Tuesday to approve the project.

They eliminated a third sidewalk taking patrons closer to the pronghorn pen because of the cost. There are no landscaping or lighting expenses.

The next planned exhibit, Mantz said, is a prairie exhibit. So, the bison exhibit fits in well with those plans. The location of the exhibit entrance also ties into the water play area the zoo plans to build in the same general area, using federal funds.

A tentative timeline starts with surveying and then site preparation in January and February. Construction of the sidewalks and boardwalk would occur in the summer and fall, Combs said, with the new area opening to the public by fall.

The bison herd now includes three males and four females, but the males are all sterilized, so there will be no calves.

The zoo plans to become part of a bison genome project, studying how many bison in human care can be traced to wild herds, Mantz said.

The zoo’s bison herd exhibit first opened in 1986, said Curator Kiley Buggeln. A couple of the animals once were housed closer to the public, but they’ve been on the back lot of the zoo for decades.

Power noted that Norman coincidentally arrived at the zoo just days after the death of the zoo’s oldest male buffalo, which had been the “alpha male” of the herd. Though never before in a herd, Norman was quickly accepted as the new alpha.

So, when Norman — named by Joe Hedrick after the buffalo calf in the movie “City Slickers” — comes over to visit, some of the others follow. They’ll be working over the ensuing months, Mantz said, to acclimate the remainder of the herd to more human interaction.

“It’s not a bad opportunity for training,” she said.

Norman was actually too tame when they got him, Power said.

“He’d run up and put his head in your chest to nuzzle,” he said. “One day, he got bit by a horsefly and he whipped his head around, putting a crease across my stomach (with his horns).”

So, the next time he ran up to nuzzle, Power had to use a leafy branch, which is also food, to teach him to stop short. As reported in the Hutchinson News.