Did you ever want to own your own bull? One that you wouldn’t have to raise or put up with his moody ways?

Now, with the help of a new direct-to-consumer agriculture company, people from urban centers from across the U.S. can participate in ranching. They can buy steer and cows, drive on out to ranches in western and central Kansas and visit their cattle — if they want, they can get a picture. And when it’s time for processing, they can share in the profits.

This turned-around beef-to-table concept is the brainchild of two brothers who grew up on a ranch in central Illinois and spent summers helping their grandfather with his cattle on his ranch in Missouri.

Josh and Jason Link put their heads together and tried to figure out what would be the best plan for both the consumer and the rancher. They came up with an out-of-the-box model and named it Agridime. “It’s been amazing to see the different kind of people that are interested in investing in an animal,” said Josh Link, the company’s co-owner and executive director. “We want to create a fully transparent sustainable supply chain where everybody can win.”

“(Consumers) get to experience farming and ranching themselves without all the work,” Josh Link said. “They are purchasing a cattle contract. Cattle is something like real estate that you can see, touch and feel.” And, because Agridime carries liability insurance on the cattle, the investor is at minimal risk.

Consumers can invest in a herd or a single cow depending on their interest or financial ability. By having consumers buy the animals directly, Agridime is allowing ranchers to do what they do best: raise cattle, both grass-fed and conventional.

“The main thing we are trying to do is helping producers and consumers make the most valuable decision with every dime,” Josh Link said. “Our way of doing that is by allowing people to experience our beef supply chains.”

Growing up, the Links noticed the cattle industry was changing. They wanted the rancher to have more say and not be beholden. They worked for years coming up with a business plan and selected Kansas because of the state’s ideal prairie.

Josh Link met up with Kevin Morgan at Morgan Creek Farms near Hope, just a few stone throws from Salina. Morgan grew up on a ranch. Like his father, and his grandfather before him, he raised cattle conventionally for decades. As a fifth-generation rancher, he wanted to go back to the old ways, having cattle graze on his pasture.

At the same time, Link was looking for ranchers who were raising grass-fed cattle.

“We saw the current problems (with traditional ranching) and the future solutions (with pasture-raised),” Morgan said. “You can see a difference in the animal’s behavior when they are raised in the pasture and are free to roam.”

All of the cattle raised on Morgan Creek Farms heads off to be butchered and then sold through Agridime. Morgan, who now works with Agridime as an animal care manager, raises about 1,500 cattle on his multiple ranches in Dickinson County, but soon, he hopes to double his herd.

Currently, about 25% of the cattle Agridime ranches from across the state raise are grass-fed, including a rancher not to far from Garden City. Josh Link wants to increase that percentage, but he can only go as fast as the market demands, keeping three-quarters of his herds conventionally-raised.

The cattle raised and sold on Agridime’s ranches board up on trucks and head for a medium-sized processing plant in Texas. This includes the grass-fed cattle, who, because of this, are both grass-fed and grass-finished, meaning they are not headed to feed yards and fattened up with grains.

“It’s straight from farm to table for the animals,” Josh Link said. “We have transitioned a lot of acres of chemically-based row crop land to pasture.”

Consumers do not have to buy the animal to be a part of Agridime. They can simply buy the conventionally-raised or grass-fed direct-from-rancher meat straight from their store in Herrington or through the mail. However, making sure the supply chain is intact is crucial to the business.

“We own all of our distribution to our beef,” Link said. “Our processors didn’t miss a single day during COVID. And our customers were not without product.”

On average, the investors get a 10% to 15% return on investment on each animal. This can amount to about $200 or higher for each angus steer.

Many farmers and ranchers around Kansas and the nation are selling directly to the consumer. Some have opened shops, others ship their product and still others have consumers show up at their barn door. “It’s hard to hit any economies of scale (not enough volume) that way,” Link said.

By putting together a variety of ranchers and giving them access to a larger market and strong supply chain, Link is hoping to change the system and make it more profitable, and easier for the rancher. As more people buy cattle on from Agridime rancher’s farms, those ranchers can hire more workers.

“We’re trying to develop a rural economy,” Morgan said. “There are a lot of moving pieces.”

Last year, Morgan hired Doug Wolf. Wolf grew up on a dairy farm and continued to raise dairy cattle until he sold the farm. “It wasn’t a feasible financial thing,” he said. “But I didn’t have to leave the animals; I just carried my experience down the road.”

Like Wolf, others want to stay in rural areas where jobs can be scarce. Link is hoping his business model can work as a springboard to reinvigorating rural Kansas.

“Healthier cattle are our biggest reason for ramping up grass-fed,” Link said. “In the wet months, we found that our cattle were much more efficient on pasture than in the feed yard. Cattle are happier on the hills.”

Part of Jason and Josh Link’s vision is to introduce more regenerative practices. To do this, they want to add hogs, chickens, sheep and goats to the mixture.

“Multispecies farms add more to the sustainability of the land,” he said. “They’re putting all the byproducts back in the soil.” 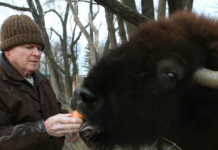