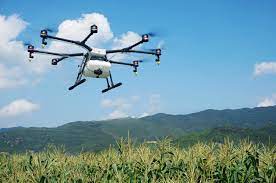 MANHATTAN, Kan. – Will Boyer thinks the view from 120 feet above a farm pasture is pretty amazing. But not just for the aesthetics.

Boyer, a Kansas State University watershed specialist, said unmanned aircraft systems — more commonly called drones – can help farmers track changes in their pastures. He notes that drone imagery has become so good that reasonable measurements of three-dimensional features can be taken from above.

“You can really pick things out a lot better from above,” Boyer said.

When using drone imagery, he said, “the quality of the photography is key to estimating grassland biomass.” Drones can take many pictures from several different angles.

From similar photos, Boyer said some tree and shrub species can be manually identified, then he’ll use software – one of those is called Sample Frequency – to identify the frequency of those species in the pasture.

Boyer said another software program – Sample Point — makes a grid of approximately 100 points within each picture so that percent ground cover can be identified from all of those points.

“There’s a lot of variability throughout the pasture,” Boyer said, noting that being able to sample the entire pasture (opposed to just a portion of it) helps to get a representative view of the field.

According to Boyer, when looking for a specific grass species in a pasture doing it from the ground might be just as productive.

Boyer said that drones can also be useful in checking water gaps in pastures so that farmers wouldn’t have to drive or walk over the rough terrain to check them.

“I think with better technology and better safety features on the drone, there’s going to be more of a universal acceptance,” Boyer said.

More information on many agricultural management practices is available at local extension offices in Kansas.

K-State Research and Extension is a short name for the Kansas State University Agricultural Experiment Station and Cooperative Extension Service, a program designed to generate and distribute useful knowledge for the well-being of Kansans. Supported by county, state, federal and private funds, the program has county extension offices, experiment fields, area extension offices and regional research centers statewide. Its headquarters is on the K-State campus in Manhattan. For more information, visit www.ksre.ksu.edu. K-State Research and Extension is an equal opportunity provider and employer.