Success during a rodeo doesn’t just mean a rider can stay on top of a bull for eight seconds, but it also means that the bull rider can walk away, ready to get bucked another day. Fortunately for one contestant at the Wild Bill Hickok Rodeo, he had success with both.

“Mom and dad came up to watch too,” Pollmeier said. “Anytime my dad gets to come up and help me, it’s pretty good.”

Pollmeier has riden since he was a kid, making it to Abilene for junior rodeo at the age of 8 or 9.

“I was riding junior steers and calves,” Pollmeie 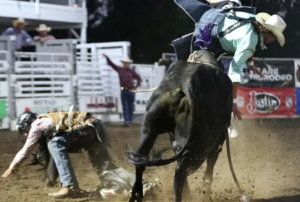 Pollmeier has traveled with other riders throughout Kansas and other states this summer, keeping up a busy schedule. He drove with three other Kansans, Brylen Dees, also from Fort Scott; Cash Toews, from Canton; and Luke Mast, from Hutchinson.

“We were in Dodge City last night, we’ll go to Sidney, Iowa, tomorrow, Phillipsburg Friday and then we’ll be back in Dodge for the rodeo on Saturday,” Pollmeier said. “We all high school rodeoed together, so we know each other pretty well.”

Driving together lets the riders save money and hit up as many events as they can.

Pollmeier had a pretty wild ride Wednesday on a bull called The Kraken, staying on for the full eight seconds before falling and having The Kraken charge angrily toward him. Fortunately, bullfighter Blake Miller was able to get in the path and received the brunt of The Kraken’s impact, flipping into the air.

“I asked him if he was alright, afterward, and he seemed to be OK,” Pollmeier said.

Bullfighters, which are professional protectors, distract these bulls from the competitors after they fall, a crucial job when dealing with a sport as dangerous as rodeo.

Miller, who’s from Belton, Texas, worked as a bullfighter for six years, four of those as a professional. He said he got into this profession after being around the rodeo since he was little.

Miller and his fellow fighter for this rodeo, Clint Lott, also from Texas, have both been at the Hickok Rodeo before.

“This is my third year being here,” Lott said. “Minus the COVID year, it’s my third in a row.”

Miller did a backflip off a barrel as a bull charged into it while Lott set up a larger innertube for the bull to charge and fling into the air.

While Miller and Lott attend shows around the country, both fighters said they enjoy Abilene and looked forward to the possibility of coming back in the future.

“It’s one of my favorite (rodeos),” Miller said. “The way that the committee and the community makes you feel (when you’re here), it makes you feel like you’re at home.”

As reported in The Salina Journal