As reported in High Plains Journal. With water, you either have it or you don’t. Roughly half of the United States is in some form of drought designation. The Colorado River is at its lowest level in years. Other river flows have been compromised because of ongoing drought conditions.

In the area of the Ogallala Aquifer—about 174,000 square miles under parts of Colorado, Kansas, Nebraska, New Mexico, Oklahoma, South Dakota, Texas, and Wyoming—water is a hotly contested debate in many circles.

Earl Lewis, chief engineer for the Kansas Department of Agriculture, Division of Water Resources, told attendees at the Aug. 16 Kansas Water Congress summer meeting in Garden City, Kansas, that when it comes to water, people need to speak plainly, clearly and respect other’s opinions. There will always be issues regarding resolution and water rights.

“That’s the issue we have a lot of times,” he said. “We don’t really push these things to the forefront and speak plainly about what we want. We’re talking about the law—do we want to talk about protecting private property rights, first in time first in right, because—is that good policy?”

Some of the issues don’t end up being easy questions. In many segments of agriculture, sustainability is a buzzword. In water, not so much.

Lewis believes if the Ogallala is depleted, it could mean the last users will be the final users.

“But is that the situation we want?” he said. “Can we let that happen? Do you think that’s a good water policy? Do you think its something different?”

Farmers, according to Lewis, are “very good at adapting to change” and find a way to make money.

“Typically most farmers are pretty good business people,” he said.

And most find a way to make more money by using less water because they have that flexibility in their business and the technology available to them.

In mid-August, the New York Times published an article, about the first-ever water shortage at Lake Mead, one of the Colorado River’s main reservoirs. The federal government issued the declaration, which triggered a cut in water supply that will mostly affect Arizona farmers. Starting in 2022, those farmers will be cut off from a water supply they’ve relied on for decades. According to the article, much smaller reductions are mandated for Nevada and Mexico across the southern border.

But larger cuts, affecting far more of the 40 million people in the West who rely on the river for at least part of their water supply, are likely in coming years as a warming climate continues to reduce how much water flows into the Colorado from rain and melting snow.

In the article it stated the Bureau of Reclamation, an agency of the Department of the Interior, declared the shortage when it issued the latest river outlook for the next 24 months. By the end of the year Lake Mead near Las Vegas, Nevada, is estimated to reach 1,066 feet above sea level. It hasn’t seen a level that low since it began to fill after the completion of Hoover Dam in the 1930s. The lake will be at 34% of capacity.

“Today’s announcement highlights the challenges we face in the Colorado River basin and elsewhere in the West,” said Tanya Trujillo, assistant interior secretary for water and science, in the article.

The fate of water usage for farmers and ranchers, as well as cities and municipalities down stream remains to be seen. The Colorado River flows approximately 1,450 miles from the headwaters in the Rocky Mountains of Colorado into Mexico, emptying into the Gulf of California. 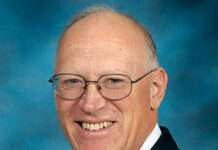