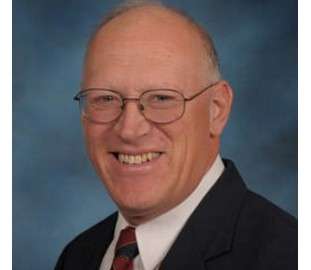 Today let’s meet a rural doctor who practices medicine but doesn’t have patients. You may ask, “How can that be?”

The answer is that the people he sees are more than patients – he sees them as friends and neighbors. This type of relationship with those in his care has led to a lifelong career in practicing rural medicine.

Last week we learned about the Community HealthCare System in northeast Kansas where Dr. Tom Walsh practices. He will retire at the end of 2021 after 46 years of practicing medicine in the rural community of Onaga, population 751 people. Now, that’s rural.

Dr. Walsh’s father Eugene was a family doctor in Onaga as well. After medical school, Eugene came to Onaga for one year to help his friend Dr. Fleckenstein – but he liked Onaga so much he never left.

Tom and his brother accompanied their dad on house calls. Tom decided to follow his father into the medical field. “I knew what I was getting into,” Tom said.

“When my folks took me to college (at Notre Dame), it was the first time I had ever been east of Kansas City,” Tom said. After graduation, he went to medical school at KU. He also met and married Marcia.

In 1975, Dr. Tom Walsh and Marcia moved to Onaga to join his father’s practice. Dr. Walsh would later become affiliated with what is now the Community HealthCare System of northeast Kansas. Marcia would rise to become the system’s chief operating officer.

Dr. Tom, as he is affectionately known in the community, has seen lots of changes in his 46 years of practicing medicine. “There have been so many improvements in treatments,” he said. When he began, Onaga didn’t even have ambulance service.

“One time when we needed to transport a patient to Topeka, we used the undertaker’s station wagon,” Dr. Tom said. Fortunately the patient survived, so the undertaker’s other services were not needed.

Dr. Tom has delivered thousands of babies and cared for countless patients. He appreciates how people in the rural communities care for each other.

Dr. Tom remembered one winter night when a man’s wife was in labor and he was trying to drive her to Onaga in a snowstorm. “He came to a huge snowdrift on Highway 16 and couldn’t get through,” Dr. Tom said. While he was stopped, a car came from the other direction carrying four K-State students. When they stopped at the snowdrift, the students learned what was going on, carried the woman around the snowdrift to their car, and drove her to the hospital in Onaga.

“She delivered an hour-and-a-half later and all was well,” Dr. Tom said.

Among Dr. Tom’s friends was a local police officer. “When I’d get in from the hospital at 2 or 3 in the morning, he would pull in my driveway and flash his lights at me just for fun,” Dr. Tom said.

One day, that officer pulled over a driver, got out of his car, stepped on a beer bottle and turned his ankle so badly that he couldn’t walk. The guy he had stopped took the officer into the hospital where he saw Dr. Tom. “I got to call the police department and tell them there was a patrol car left out there,” Dr. Tom said.

The people factor is what has kept him in Onaga and has even drawn others.
“Somebody told me we’d never be able to recruit doctors to a small town,” Dr. Tom said. “But now, we have some of the finest young physicians anywhere.”

Dr. Tom and Marcia have three married children and nine grandchildren. “I have been very blessed,” he said.

For more information about the Community HealthCare System, see www.chcsks.org.
A doctor without patients? Another friend wrote: Dr. Walsh loves getting to know patients as people rather than just as medical conditions. “I don’t have patients,” Dr. Tom said. “These are neighbors, friends, colleagues, and co-workers.”

We commend Dr. Tom and Marcia Walsh for many years of service to families in the region, and for seeing patients as people. Happy retirement, Doc.

Audio and text files of Kansas Profiles are available at http://www.kansasprofile.com. For more information about the Huck Boyd Institute, interested persons can visit http://www.huckboydinstitute.org.

The mission of the Huck Boyd National Institute for Rural Development is to enhance rural development by helping rural people help themselves. The Kansas Profile radio series and columns are produced with assistance from the K-State Research and Extension Department of Communications News Media Services unit. A photo of Ron Wilson is available at http://www.ksre.ksu.edu/news/sty/RonWilson.htm. Audio and text files of Kansas Profiles are available at http://www.kansasprofile.com. For more information about the Huck Boyd Institute, interested persons can visit http://www.huckboydinstitute.org.

K State Research and Extension is a short name for the Kansas State University Agricultural Experiment Station and Cooperative Extension Service, a program designed to generate and distribute useful knowledge for the well being of Kansans. Supported by county, state, federal and private funds, the program has county extension offices, experiment fields, area extension offices and regional research centers statewide. Its headquarters is on the K State campus in Manhattan. For more information, visit www.ksre.ksu.edu