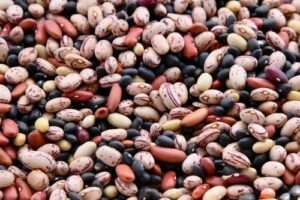 A new study Trusted Source based on 30 years of observation has reconfirmed that replacing red meat with plant-based protein can help keep your heart healthy.

Researchers based their findings on observing 43,272 U.S. men with an average age of 53.
Processed red meats include bacon, hot dogs, sausages, and salami, which are associated with an increased risk of death and major chronic diseases, according to the study.
There’s more evidence that swapping out a juicy steak for plant-based meals can benefit your health.

A new study Trusted Source, based on 30 years of observation, has reconfirmed that replacing red meat with plant-based protein can help keep your heart healthy.

The study, published by The BMJ, showed that replacing red meat with high-quality plant foods, like beans, nuts, or soy may be associated with a modestly reduced risk of coronary heart disease (CHD).

“There have been a lot of studies that have gone away from the red meat diet, focusing more on a plant-based diet,” said Dr. Anjali Dutta, a cardiologist with New York-Presbyterian Medical Group Queens.

“There has been an emphasis on a Mediterranean diet, which is a high emphasis on nuts, less on carbohydrates,” she said. “This study was really great in showing the benefits of… a plant-based diet and the cardiac effects and risk reduction.”

While the study focused on men in the United States, it’s likely these findings will hold true for women as well, based on findings of other studies Trusted Source.

Although this isn’t new research, as we’ve long heard about plant-based and Mediterranean diets for years, the study does provide new insights.

“While much research exists on this topic, this paper sets out to examine other significant factors such as the amount of red meat consumed and whether the meat is processed,” said Nicole Roach, RD, CDN, registered dietitian at Lenox Hill Hospital in New York.

Processed red meats include bacon, hot dogs, sausages, and salami. These foods are associated with an increased risk of death and major chronic diseases, the study said.

Eating red meat can put you at risk for coronary heart disease
Researchers based their findings on 43,272 men in the United States, with an average age of 53, from the Health Professionals Follow-Up Study.

None of these men had cardiovascular disease or cancer when they enrolled in the study.

The observation began in 1986, and participants filled in a detailed diet questionnaire every 4 years thereafter. Over the 30-year period, 4,456 CHD events were documented, and 1,860 of those were fatal.

Intake of one serving per day of combined plant protein sources, which include nuts, legumes, and soy, was associated with a 14 percent lower risk of CHD.

“The intake of high quality plant-based proteins such as nuts, legumes, as well as whole grains and dairy products, showed an additional decreased risk for heart disease,” Roach said.

She added that choosing plant-based options over red meat can help reduce the amount of saturated fats, cholesterol, and heme iron, which can keep the heart healthy.

“Plant-based options also increase the intake of unsaturated fat, fiber, antioxidants, polyphenols — all of which can benefit heart health by either increasing protective cholesterol, reducing bad cholesterol, or improving the function of the heart’s blood vessels,” Roach said.

HEALTHLINE RESOURCES
Until you get through this, count on our support
In difficult times, you need to be able to turn to experts who understand and can help strengthen your mental well-being. We’re here for you.

Why now?
This isn’t the first time researchers have suggested swapping red meat for plant-based protein. So what makes this research relevant right now?

“This is a new trend with everything going [on right now],” Dutta said. “There are infectious causes associated with meat eating. Overall, mortality risk reduction with a plant-based diet is what started this study.”

Simply put: There has been a lot of news regarding red meat eating and meat processing surrounding the COVID-19 pandemic.

According to The Harvard T.H. Chan School of Public Health, consumers have had to face beef and pork shortages, as well as rising prices, which have forced people to opt for less red meat.

The World Health Organization also released nutrition advice during the COVID-19 pandemic that emphasizes the consumption of less fat, salt, and sugar to lower the risk of obesity, heart disease, stroke, diabetes, and certain types of cancer.

Can you still eat red meat?
Of course. Everything in moderation has always been the well-balanced diet mantra.

“A little bit of red meat now and then is OK,” Dutta said. “A few times a week is fine, and mixing up vegetables and grains to have a more balanced diet is really what the benefit is.”