The state of Arkansas last year gave the Kansas Department of Wildlife and Parks 50 young adult Blue Catfish free of charge to be used for breeding.

That spawned a new program that will enable KDWP to be self-sufficient in terms of producing Blue Catfish for Kansas lakes, said Dan Mosier II, senior manager of fish culture.

KDWP staff on June 13 collected the first two Blue Catfish spawns for the program, consisting of a total of about 60,000 eggs, KDWP announced Monday on its Facebook page.

“This is an exciting start for the program, and for the species and anglers who target them in Kansas,” Monday’s post said.

Blue Catfish are native to several rivers in northeast Kansas, including the Kansas and Missouri rivers, that site said. 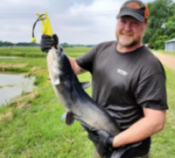 The largest Blue Catfish caught on record weighed 109 pounds, 4 ounces, with the Kansas record being 102.8 pounds.

“Blue Catfish exist in most of Kansas’ large federal reservoirs and are growing in popularity with anglers,” KDWP said in Monday’s Facebook announcement.

Fifteen Kansas lakes have been stocked with Blue Catfish since 2012, with those mostly being the state’s larger lakes, Mosier said.

Mosier said KDWP formerly needed to send fisheries staff members in trucks to Arkansas, where they would pick up and bring back water containing Blue Catfish “fry,” which had developed to the point where they were capable of feeding themselves.

Those fry would grow for four or five months in hatchery ponds until they reached 6 to 10 inches in length, at which point they would be released into select Kansas reservoirs, KDWP said.

But the state of Arkansas recently stopped producing its own Blue Catfish for distribution because it no longer saw a strong need to stock that species, Mosier said.

“Our source of fry kind of dried up,” he said.

The state is keeping those breeding stock at its Pratt Fish Hatchery in south-central Kansas, he said.