They’re creepy and they’re kooky, mysterious and spooky. And all together ooky…
But unlike the Addams Family of 1960s television fame, spiders are likely to be gone by Halloween.
Kansas State University entomologist Jeff Whitworth says four spider species common to Kansas are likely to be in hiding within the next few weeks.
Two species commonly found in the home that are of most concern to humans because of their venom – the brown recluse and black widow – are ready to go into winter hibernation. Whitworth said those two species are rarely seen from mid-October to mid-March.
The brown recluse is identified by a signature black line that resembles a violin on its back, with the neck of the violin pointing to the rear of the spider. The bite of a brown recluse releases a hemotoxin that affects a person’s blood cells. A bite from a brown recluse may require medical attention.
The adult black widow is more elegant looking, typically black with a colorful, hourglass shaped mark on their abdomen. The bite of a black widow releases a neurotoxin that affects the nervous systems of humans and animals.
Two less-venomous spiders more common in farm fields or open areas include the orb spider and the garden spider.
The orb spider is typically a big, brown, round spider that weaves intricate webs.
“You will often see webbing, but not the spider,” Whitworth said. “The webbing catches insects, and then the spider comes out in the evening to feed on what they’ve caught” and repair the web, if needed.
Another common field spider, the garden spider, also is very large, and typically dark green or black and yellow with long legs. Farmers often run into garden spiders when walking between fields because they’ll use corn or sorghum or large weeds to build their webs.
But like the brown recluse and black widow, orb spiders and garden spiders are likely to be out of sight by the time the scariest holiday of the year rolls around.
“We are just about to run out of being scared by spiders, and just before Halloween,” Whitworth said, “because the adult field spiders are going to lay their eggs and then go away. The brown recluse and black widow are going into hibernation and won’t be back until March or April.”
Whitworth said that even though the brown recluse and black widow are better known to be dangerous, “all spiders are venomous.”
“Most spiders don’t affect humans, but you just never know,” he said. “I always caution people not to play with spiders.” 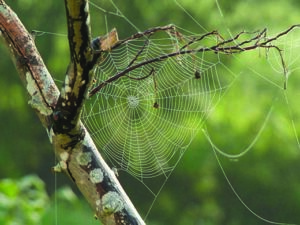