Tomatoes are often classified as determinate, semi-determinate or indeterminate.  Determinate plants produce one large crop and then virtually nothing thereafter.  They are favored by commercial growers that want to harvest most of the fruit from one picking.  They then use succession planting where a new crop is planted on a set schedule to have fruit production throughout the season.  Mature plants are smaller than other types and can be planted closer together to get the most tomatoes from a set space.  Primo Red is a variety that is strongly determinate.
Indeterminate plants are the traditional tomatoes that never stop growing.  They are capable of producing fruit throughout the season unless disease stops production or until frost kills the plant.  They do best with support as they can reach six feet tall when staked or caged.
Semi-determinate plants are more compact than inderminate types but are also capable of producing fruit throughout the season.
Most of the varieties available to home gardeners are either indeterminate or semi-determinate.  Though both are capable of producing fruit throughout the season, our hot Kansas summers often cause a dry spell in production of both types.  Tomatoes are less likely to set fruit when night temperatures remain above 75 degrees and day temperatures are above 95.  Hot, dry winds make the situation worse.
Gardeners with limited space will likely prefer indeterminate or semi-determinate types to stretch out the harvest season.  If there is space, you may want to grow a combination of all three with the determinates used to produce a large harvest for canning or tomato juice and the remainder for fresh eating.  (Ward Upham) 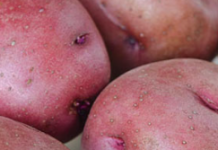 Preventing Potatoes from Sprouting in Storage