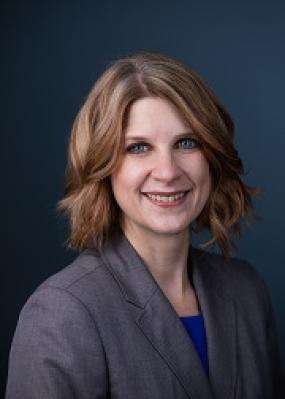 LAWRENCE— Donald Trump had threatened to ban TikTok outright during his presidency, while President Joe Biden’s administration has shared concerns that the China-based app is mining users’ data.

University of Kansas researcher Jane Barnette has a different set of concerns, expressed in her chapter of the new book “TikTok Cultures in the United States” (Routledge).

The book, edited by viral TikTok teacher Trevor (@dr_boffone) Boffone, analyzes the trendy, video-based app from a variety of angles, with chapters focusing on its presentation of gender and sexuality, feminism, race and ethnicity, and wellness.
Barnette, an associate professor of theatre who teaches a class about witches in popular culture, contributed a chapter titled “Hocus-Pocus: WitchTok Education for Baby Witches.” In it, she focused on the potential – and actual – transmission of demonstrably false information on the traditions of witchcraft among the billions of posts using the hashtag #WitchTok.
“A lot of TikTok is educational,” Barnette said. “People use it to learn how to cook a recipe or do their makeup, and so many people use #WitchTok to enter the craft.”

With over 3 billion downloads since its debut in 2016, TikTok is the fastest-growing social media app and seventh most popular overall. Much of its growth has been attributed to the effects of COVID-19 lockdown and pandemic restriction.
Barnette said she decided TikTok was worthy of scholarly inquiry after seeing its relevance to her “Generation Z” students’ lives. Though TikTok recently bumped up to a 10-minute time limit, for most of the app’s lifetime, video posts have had one- and then three-minute time limits. Creators can also make “duets” by placing themselves side-by-side with and making timely comments upon the original video post. The “stitch” feature is similarly referential, but it allows the commenter to interstice their video with the original post.
Barnette wrote that these features afford users “a means of performed analysis” and that they “fall into the category of adaptation dramaturgy, or adapturgy,” which was the subject and title of her 2017 book.
“I realized that there was this really interesting performative mode to TikTok,” Barnette said. “It’s a way of extending and reframing conversations. And I think that can be really powerful, especially for young people who are trying to figure out ‘What is my take? What is my political stance? What do I believe?’”
The problem comes, she wrote, when erroneous information is passed along by young and enthusiastic yet misinformed users. Typical rhetorical policing by communal elders can handle many aspects of this regarding #WitchTok, Barnette wrote. And yet it can be downright dangerous in its most extreme form, she said, citing clips giving out dubious information about herbs to induce an abortion that she saw posted in the aftermath of the Supreme Court’s June 24 Dobbs vs. Jackson Women’s Health Organization decision.
In the year between the time Barnette wrote her book chapter and today, views of #WitchTok posts grew from 18.5 billion to nearly 24 billion. Thus, Barnette said, it behooves us to study the effects of the free-for-all aspects of the platform on emerging public conversations within its different communities of interest.
-30-