As reported from High Plains Journal, Bat Masterson, the iconic western lawman, will have a visible perch again on the High Plains. A 6-foot bronze sculpture that weighs about 750 pounds will be placed onsite at the Mueller-Schmidt House Museum, 112 E. Vine St., in Dodge City, Kansas. The Bat Masterson statue dedication will be at 2 p.m. June 19. The statue project has been in the hands of Carson Norton, a professional artist from Leoti, Kansas, who said at a pre-event teaser Masterson will be depicted leaning across a saloon bar with a shot of whiskey on the bar. 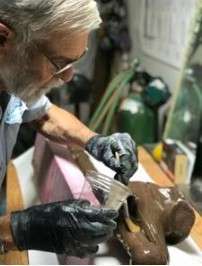 “The overall design I wanted to keep it fitting for his nickname, ‘the Dandy,’” Norton said, adding the statue will show what is well chronicled in pictures of the famous lawman with his suit jacket, vest and watch chain. Tucked behind his coat is Masterson’s six-shooter.

Norton, a professional artist, says the Masterson statue was a dream come true for him and his family.

His dad, Charlie, is a well-known sculptor and his mom is a professional artist.

“Even at a young age I always had clay under my fingers,” Carson Norton quipped. Eventually he went to Fort Hays State University and earned his master’s in history studying the American West and military history. After graduation his career evolved similarly to his dad’s, which meant he bridged the worlds of art and history.

The Ford County Historical Society contacted the Nortons after they had completed the Dr. Samuel Crumbine statue in 2017 for the Kansas Health Institute in Topeka. Crumbine was a pioneer in stopping the spread of transmissible diseases and is credited with saving many lives for his campaigns to “swat the fly,” “don’t spit on the sidewalk” and “ban the public drinking cup.”