As Kansans, we like to feel that we’re relatively safe in our own homes. In general, we know how to protect ourselves and our families, but what if that intruder was smaller than a quarter?

The brown recluse, yellow sac and black widow spiders are that tiny enemy. They are the three most venomous and deadly spiders in Kansas and will find their way into your home if you’re not careful. However, if you find a spider in your home there is no need to panic.

Kansas is home to more than 500 species of arachnids, and few come close to actually being dangerous. According to Jeff Whitworth, Ph.D., professor of horticultural entomology at Kansas State University, all spiders are venomous and use that venom to kill their prey for survival.

The brown recluse, yellow sac and black widow spiders are the most dangerous because they have large enough fangs to pierce human skin. Luckily, each spider can be identified, so you know when you see one. Spider anatomy can be broken into two basic parts: the cephalothorax, where the eyes, fangs, and legs are housed; and the abdomen, where the web sacs are located.

If you live in Kansas, you are no doubt familiar with the brown recluse spider. They love to live indoors and often do so all year round because houses are kept at the perfect warm temperatures they need to survive.

A brown recluse can have some variation in its appearance. They are typically ¼ to ¾ of an inch in length, have six rather than eight eyes and can be any shade of brown but will have the marking of a violin on the top of their cephalothorax with the neck of the violin going toward their abdomen.

Whitworth said they prefer to live in dry undisturbed areas, so you will most likely find them in closets, storage rooms, garages and sheds. They leave their webs at night to go hunt. This might sound scary, but they won’t interact with humans unless they feel threatened.

Brown recluses are not aggressive but may bite if threatened by actions such as rolling over on them in your sleep or putting on clothes they’re hiding in, said Deborah Roan Smith, Ph.D., who is a professor in the department of ecology and evolutionary biology at University of Kansas, with work published in the Journal of Arachnology.

“Most bites of the brown recluse found in the central U.S. states are probably harmless, possibly even go unnoticed,” Smith said.

However, in some cases, especially in those with a low immune system, loxoscelism can occur. This is when the venom spreads throughout the body and results in nausea, vomiting, fever, rashes, sore joints and muscles.

Brown recluses are most famously known for their necrotic bite. An ulcer may appear where the bite was found and begin to grow and spread, causing the skin to decay over time and the flesh in the area to die off. 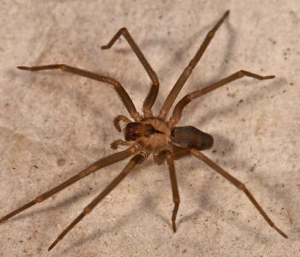 Black widow spiders are known universally as being one of the deadliest spiders. They are the easiest to identify of most any spider. All black widows have a red hourglass on their abdomen. Black widows primarily make their home outdoors and can be found in barns, carports, sheds, or other outdoor structures, including playground equipment.

Black widows are uncommon in Kansas but not rare. They are more frequently reported in southern Kansas but could appear anywhere in the Sunflower State.

Smith said they are least commonly found in northeast Kansas. Black widows have poor eyesight and rely on vibrations to see. They prefer dark enclosed places and often hang upside down in the middle of their web, waiting for prey.

Black widows are not aggressive and only bite humans as a last resort but will typically play dead or drop to the ground and run away when confronted by danger. Contrary to popular belief, black widow spiders aren’t very fatal. If bitten, it is not likely for one to suffer any long-term effects or serious damage. A black widow bite is very painful but not deadly. In most cases, a bite is a “dry bite” and lacks venom. If injected with the venom the latrotoxin can result in muscle pain, abdominal cramps, muscle spasms, excessive sweating and increased heart rate.

“(They are) rarely fatal but can be dangerous for small children and people with pre-existing health problems,” Smith said.

Yellow sac spiders, like brown recluses, are common throughout Kansas. Their front legs are significantly longer than the rest. They are a pale-yellow color and often have an orange-brown stripe going down their abdomen.

Their bite can cause slight pain and can cause similar effects to that of a brown recluse but not nearly as severe and will not cause necrotic symptoms.

The black widow is the least harmful of these three arachnids, and the brown recluse the most dangerous. If bitten by a black widow, medical attention is not always necessary.

“Brown recluses are the most common and they live in homes, which makes them more dangerous than other spiders like a black widow that lives outside,” Whitworth said.

The best treatment is to manage the symptoms, Smith said, by lowering blood pressure and taking muscle relaxers. However, if bitten by a brown recluse, seek medical attention, and if possible, bring the spider with you so it can be identified.

“It’s always important to show the spider for identification because many people think they have been bitten by a spider when there is a different biter or have a different condition entirely,” Smith said.

A brown recluse bite, in some cases, can result in severe flu-like symptoms or flesh decay said Whitworth.

The best treatment is to show your doctor the spider or a picture of it, so they can identify it for themselves.

“Spiders are not life threatening,” Whitworth said. “To other creatures they may be, but to humans, no.”