The best fishing days of the year are just around the corner and there’s nothing worse than hooking that first fish of the year only to have the line snap. Fishing line loses its effectiveness the longer it sits on a reel, especially monofilament line. Now is the perfect time to re-spool those reels and organize the rest of your fishing equipment for that matter! So, when that perfect day rolls around to hit the water, you’re ready!

With that being said, let’s cover some basics about fishing line.

There are three main types of fishing line available on the market today: monofilament, fluorocarbon and braid. While all three will get the job done, applying the appropriate line to the appropriate situation will lead to more fish hooked up and more fish landed.

All fishing reels and rods were designed to 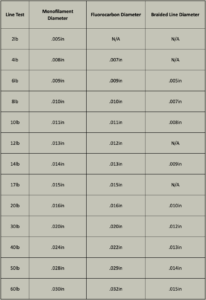 hold a particularly sized line. Reels will list a set number of line poundage per yards (such as 6lb/210yds) and rods will list a line class (such as 6-10lb). What this is really referring to is not so much the line’s pound test, but rather the line’s diameter. However, these classifications were created when the majority of anglers were spooling their entire reel with monofilament line, which has been the primary line used by anglers for the last half century.

Technological advancements in fishing line have seen fluorocarbon and braided line ascend to the mainstream market. Why is this important? Because the same pound test for each of these three types of fishing line have differences in overall line diameter, which can make it difficult to pair the appropriate line when the rod and reel are telling you that they require line with a certain pound test for optimal casting and retrieving performance.

For example, let’s say you have a spinning reel that says it will hold 165 yards of 10-pound line, so you purchase one 165 yard spool of 10-pound braided line and put it on your reel only to realize that you didn’t fully spool the reel. Why? 10-pound monofilament, which is what the reel was referring to has a line diameter of .011 inches and 10-pound braided line has a diameter of .008 inches. Below is a chart to show a breakdown of the three line types when it comes to pound test and line diameter.

As you can see, if you have a reel classified for holding 180 yds of 12-pound monofilament line, you could actually spool 180 yards of 40-pound braided line or 180 yards of 14-pound fluorocarbon line. This increases the break strength of your fishing setup without sacrificing total amount of line. The more expensive fluorocarbon and braided lines will typically have a slightly smaller diameter when compared to this chart, but 1/1000th of an inch is not going to make a difference for this discussion.

For optimal casting, retrieving and fish fighting performance always stay within the line and lure weight classification ranges that your rod and reel recommend on their labeling. Remember those classifications are tailored for monofilament line, so if using fluorocarbon or braided line make sure to match the diameter equivalent.

So now that we’ve blazed through what your rod and reel line classifications are all about, let’s talk about the line itself.

Monofilament is a buoyant, water-absorbent line that has long been used by anglers on traditional spinning, spincasting and casting reels for its cast-ability and availability at mainstream sporting-goods stores. Unlike fluorocarbon, monofilament line floats and has the most stretch-ability of the three types of line.

Due to it being relatively inexpensive, monofilament is typically used as a main line, meaning the entire reel is spooled with monofilament and the lure is tied directly onto that line. Because of the line’s buoyant properties, it is great for topwater lures and as a leader when fishing off the bottom. Also, due to its stretch-ability, it is a great option for crankbaits because the fish can turn and swim with the lure allowing you time to get a good hook set. A fish is also less likely to throw a hook tied on monofilament line when it goes airborne. The stretch-ability is also helpful when it’s cold or the fish are finicky and you need them to hold the bait just a second longer so you can get a hook set.

A disadvantage of monofilament line is that it has a lot of line memory when it sits on a reel, meaning if you try to throw a lure that is too light for the line class of the rod the cast will more than likely result in line twists (the most common line problem anglers face). How do you get the memory out of a monofilament line on a spinning reel? Just add water. Unscrew the drag clip off the top of the reel and pop the spool off the reel. Hold the spool under warm to hot running water and rotate to make sure all of the line is getting some direct contact from the water. Heating the line like this will remove nearly all of your memory before hitting the water.

Fluorocarbon line is all the rage in today’s fishing community. Up until the last 5-10 years, fluorocarbon line has been used primarily as a leader and not a main line due to its lack of cast-ability. However, improvements in technology have fixed that problem and anglers have taken advantage. Unfortunately, it is still about twice as expensive as monofilament line, which is why most still use it as a leader instead of a main line.

Advantages of fluorocarbon line are that its nearly invisible under water because it has about the same refractive qualities as water and though it stretches some, it’s more sensitive than monofilament. It is a great option for finesse fishing techniques in clear water. Three feet is typically enough leader when connected to braided line. Anything longer will require casting your connection knot through the guides of the rod which can lead to abrasion and knot failure, but may be necessary when using light spinning equipment in super clear water or if the fish are finicky. It’s really just up to what you as an angler are comfortable with.

If fluorocarbon has any disadvantages, it’s that it sinks and may not be as abrasion-resistant as monofilament, but that really only comes into play if you’re fishing topwater or trying to work a bait through hard structure that’s up off the bottom like submerged hardwoods.

Braided line has been around longer than most anglers realize, but advancements in cast-ability and break strength compared to line diameter have made braid a favorite line selection of anglers.

Braided line cuts through grass and wooden structure better than monofilament and fluorocarbon line, making it an optimal line for flipping and pitching heavy cover.

Braided line has no stretch giving it superb feel for the angler in regards to contact with their lure or bait. But because of that lack of stretch and superior break strength, tying braid directly to your hook is a risky endeavor, especially for bank anglers.

Why is it risky? It is nearly impossible to break your line or knot when you get snagged. This is problematic at small bodies of water because anglers end up cutting their line leaving, in some cases, several dozen feet of line in the water as opposed to simply losing the hook or lure at the spot of the snag.

I understand tournament and other professional anglers are betting their livelihood on each fish landed, so tying on a leader and having one more knot on the line is equally as risky to them. But for all the rest of us out there, tying on a short monofilament or fluorocarbon leader with a double Uni-knot will go a long way to reducing stress on your rod and reel when snagged as well as decrease fishing litter in the water and on the banks.

If there is any “significant” disadvantage to braided line, it’s that it may be more visible to fish than monofilament or fluorocarbon. In heavy cover or low light conditions, though, that probably doesn’t matter. Braid also does not perform well when run through rocks. Rock will easily fray and cut braid resulting in line breakage, which is where a monofilament or fluorocarbon leader comes in handy.

The great advantage to braided line is that you get added break strength to your fishing setup without sacrificing the amount of line on your reel, which comes in very handy when fishing in deep water or when hooked into a big fish that wants to take a lot of drag. For example, you can put twice as much line on a reel with 30-pound braid than you would get from 30-pound monofilament or fluorocarbon due to line diameter. Not to mention the overall smooth casting without the fear of the dreaded line twists.

An organized and prepared angler is a successful angler. Figuring out what type of line to pair with your reel and rod is part of the fun of fishing. There is no right answer, each angler will find their own sweet-spot, but keeping your line size within the recommendations of your reel and rod classifications will help your equipment perform better and last longer. 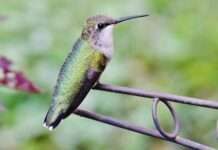