After less than one year, the Pride of the Prairie exhibit at Rolling Hills Zoo is weeks away from opening.

Zoo officials are looking at an opening day in early August, less than a year from the groundbreaking in November 2021.

Linda Henderson, Director of Development and Marketing, said that the construction has doubled the outdoor space of the habitat for their two female lions Kamali and Zalika. A high vantage point, 180-degree personal viewing cave has been built for the lionesses where they can climb on top of the cave and view the area around their habitat from behind a tall mesh fence.

Visitors can go under the viewing platform and look through a window directly underneath a 450-pound lion, possibly catching a glimpse of the bottom of the lion’s paws. There is also a window where visitors can get face-to-face with a lion from ground level.

A special training window allows visitors to watch the zookeepers train the lions and take care of the animal’s daily needs and health care. New giant graphics will be installed to give the public information about the Safe Species program and what they are doing to save African lions from extinction. There will also be general information about lions and another graphic that will describe the lionesses living at the zoo, information on how to tell them apart, their personalities and their likes and dislikes. 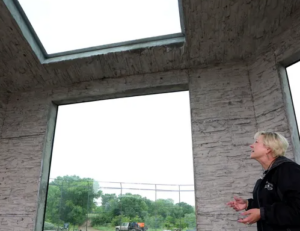 The exhibit will feature the native tall prairies of Kansas that mimic the savanna grasslands of Africa. The new area will be nearly 20,000 square feet.

The exhibit has new indoor space and additional off-exhibit housing. Two large seven-ton boulders were lifted in with a crane and set in the new housing structure and then the roof was built overtop. The additional housing will allow the zoo to introduce a male to the zoo’s pride, which could take several years. The space can also be used in the future as a den for a lioness and her new cubs.

All of the funds for the close to $1 million project were raised before construction began on Nov. 12, 2021.