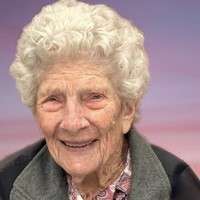 HELEN (NICHOLSON) SIMON
Helen Marie Simon, 100 years old, (born November 29, 1921) of Maize, Kansas, passed away on June 15, 2022. Helen was born to Jennie and Harry Nicholson of Maize, Kansas. She is proceeded in death by her parents, her husband Marcellus “Sally” Simon, and her five brothers, Bill (1903-1978), Jim (1905-1936), Gene (Cricket 1907-1977), Clyde (Trapper- 1909-2001), and George (1917-1995).
Helen wed Marcellus (Sally) Simon on August 13th, of 1946. Together, Sally and Helen built their farmstead and raised two children, Steve Simon (Sherryl Simon) and Diane Taylor (Michael Taylor) both of Maize, Kansas. Along with the farm operation they built, Sally and Helen opened the doors to M&N Raceway (Now Kansas International Drag-way) in 1963.
Helen was always the hardest worker on the farm and she was the first to let you know that. She could always be found helping in the chutes, running grain to the elevator, swathing hay, or helping build fence. Her work ethic was truly unmatched. In her later years she could be found cruising around on her John Deere Gator causing havoc to her neighbors and keeping her family busy tracking her down. She was the glue that held her family together.
Helen leaves behind her two children, 8 grandchildren, 16 great grandchildren, and 2 great, great grandchildren. She was a beloved wife, mother, daughter, grandmother, friend, and so much more. Helen will deeply missed by all those who were lucky enough to know her.
Service will be held 10:00 a.m., Wednesday, June 22, at Baker Funeral Home Chapel – Valley Center, Kansas. Graveside will follow the service at Maize Park Cemetery, 12733 W. 53rd St. N., Maize, Kansas.
Memorials may be designated in her memory to County Care Hospice, 104 N. Steen St, Mt. Hope, Ks 67108-9305.
Condolences may be left for the family at www.bakerfhvc.com.