I’m daughter Lovina (18) and I will be writing the column for this week. Congratulations to my cousin Emma and her husband Menno, who had a baby girl on November 2. Her name is Jazlyn Grace, and I am going to go see her tonight—can’t wait!

Dustin and Loretta’s little boy Denzel is doing great, and he’s growing by the minute. I think he’s trying to put on extra weight to stay warm for the winter. He’s also a picky eater and only likes formula, and only certain kinds. I tried to give him a bite of my bologna sandwich, but apparently he’s not very fond of that, either. (All jokes!)

I’ve been staying with Loretta on some mornings after Dustin goes to work to help her with the baby, and some mornings she comes over here. I’ve seen Denzel almost every day since he was born, and I have still managed to avoid ever changing his diaper. One day when I have children of my own, I’ll have to endure the suffering of changing diapers, but not today. This morning he had a messy diaper, and I think there were more contents on the outside of the diaper than there were inside.

Quite a while ago I was helping Mom make V-8 juice and the carrots reminded me of a time when Kevin (17) and I were just around seven years old. Mom used to tell us that eating carrots was good for our eyes. Even though that’s true, I think she said it mostly so we would eat our vegetables. Anyway, I remember we were trying to see a deer out in the field but we couldn’t see it so well because it was so far away, so I told Kevin to grab the bag of carrots out of the fridge, and we stood there by the window staring into the field, eating one carrot after another waiting until we could see the deer better. We could have used binoculars, but we used carrots instead. I think we somehow actually convinced ourselves that we could see the deer more clearly.

For breakfast this morning I made sausage, egg, and cheese griddles for Mom, Loretta, Kevin, and myself. I got the idea from when I used to work at McDonald’s. Although if I must say it myself, mine taste better. I know it sounds like I’m bragging, but that’s only because I am.

Thanksgiving is coming up, and then Christmas. Daniel (my special friend) told me to start making a list of things that he could get me for Christmas. I was more than happy to, but I think the list was a little longer than he expected. He said, “Girlfriends are expensive,” but the smile on his face says, “It’s totally worth it.” I already have ideas of what I’m going to get him for Christmas. I like to get him things that I think I could use too, sometimes. It’s like getting myself presents, but in a sneaky way. I always remember that Jesus is the reason for Christmas, the gifts are only a bonus.

I’m pretty excited for sister Susan and her fiancé Ervin’s wedding on December 30. Daniel and I will be serving the bride, groom, and the witnesses at the wedding. I’m sure it will be a fun day, especially since I’ll be there (the last part was a joke).

Daniel bought a horse off my brother Ben. Her name is Lightning, and she’s a Dutch Harness/Standardbred mixed. She couldn’t be more opposite than his other horse, named Buddy, who’s a Haflinger. Buddy is short, stalky, with light colored hair, and he’s slower than some horses, but he’s strong. Daniel doesn’t like when I call Buddy slow, so hopefully he doesn’t read this. Lightning is tall and skinny with dark hair, and she’s very fast but she can’t pull as much weight as Buddy.

On weekends when we spend time together, we use one horse or the other, depending on what mood we are in. If we want to actually get somewhere on time, we use Lightning, but if we want a relaxing buggy ride, then we use Buddy. Daniel also uses Buddy in the field for making hay, raking hay, and baling it. Daniel’s teaching Buddy how to horseback ride right now.

The other day Mom washed clothes, and I went around to gather all the dirty clothes from everyone’s rooms. They each have a clothes hamper in their room, but Ben’s clothes were anywhere but in the hamper. Some by his bed, by his couch, by his closet, under his cart table, and zero clothes in the hamper. Ben’s room is always the messiest—he could care less how it looks as long as he can get to the bed to sleep at night. Joseph and Kevin share a room, and I always hear Joseph bossing Kevin because Kevin messes the room up after Joseph has it cleaned. My room stays clean until laundry day, and then once the laundry starts adding up on the couch I give up and stop cleaning it until the next week.

Well, I better go get my work done. I enjoyed writing the column again and hope you all will enjoy reading. Hope everyone has a fantastic week, God bless!

Stir together flour, sugar, baking powder, and salt. Add eggs, oil or butter, and milk, and stir to combine. Spoon batter onto a hot griddle or pan. Cook two to three minutes, until surface of pancakes have some bubbles, then flip. Continue cooking until brown on both sides. 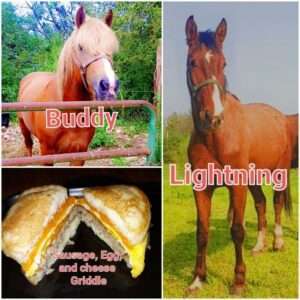 This week Daughter Lovina shares a recipe for sausage, egg, and cheese griddles, and talks about the two horses her special friend Daniel now has. 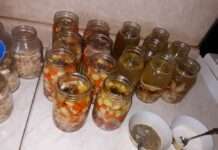 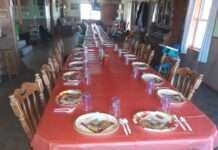