On January 14 we had our family home for a late Christmas. With the preparations of daughter Susan and Ervin’s wedding, we decided to wait until later. We told everyone to be here around 9:30 a.m. for brunch.

Our brunch was simple but still good. We had a breakfast casserole made from eggs, potatoes, bacon, sausage, smoked sausage, sour cream, Velveeta, and onions—all mixed together and baked. Then we also had sausage gravy and biscuits, cinnamon rolls, cookies, milk, chocolate milk, orange juice, apple juice, coffee, and V-8 juice.

Our family total is 25, so the table was set for all of us. We added two six-foot tables to our 10-foot dining room table. Andrea, 11 months, was in a booster seat, and Denzel, six months, was in the highchair.

As the children arrived, they were attracted to the table with their gifts. They would look for the one with their name on it, then hold it and turn it over and try to guess what it was. Seeing their faces light up was so precious. They were almost too excited to eat breakfast.

After dishes were washed, which was very few since we had paper plates and cups, etc., we passed out their gifts. We then played some games where they could win extra small gifts.

Around 1 p.m. we set out the snacks, which was a good variety including fruit and dip, veggies and dip, cheese ball and crackers, popcorn, chips, cheese dip, peanuts, candy, etc. We played games such as Marble Chase and Yahtzee as we snacked. The day went much too fast.

Thanks to some of you readers who sent money so I could do something for our family. I ordered pizza from town to be delivered so everyone was able to eat before heading home. It was one way to treat everyone.

It was another Christmas down in history for the Eicher family. We truly have so much to be thankful for with all the blessings God sends. We have a few sons-in-law who are off from the RV factories for over six weeks. With groceries being so much higher, it doesn’t make it easy to support a family. This is affecting a lot of people. We put our full trust in God and know he will provide a way.

The evening before the family Christmas, Joe and I attended the Christmas dinner at the metal shop owner’s house for a delicious meal. The employees had a cornhole tournament. All employees were given a cornhole game to take home, among other gifts. Joe didn’t have one yet, so that will be nice for him to have his own.

On January 6 (Epiphany or Old Christmas), the neighbors were all invited for a 5 p.m. supper at our neighbors Richard and Erma’s house. They served us a delicious meal of mashed potatoes, gravy, dressing, green beans, and poor man’s steak.

After supper we played games in their attached garage—cornhole, Rook, Uno, and canasta. Then snacks were set out for everyone to eat, including homemade ice cream. It was a fun night of fellowship.

On Sunday, January 15, our family gathered at daughter Susan and Ervin’s house in honor of granddaughter Jennifer’s fifth birthday. She was so proud that everyone came and that she could blow out the candle as we sang Happy Birthday to her. She helped daughter Verena decorate her cake.

Granddaughter Allison’s birthday was December 27th while we were at the community building preparing for the wedding. We all sang “Happy Birthday” to her. She later told daughter Elizabeth (her mother) that “they sang ‘Happy Birthday’ to me and blessed me too.” Such sweet innocence.

Recently, daughter Elizabeth had to take four-year-old Timothy (T.J.) to the doctor for his asthma, and he has an inhaler now. One morning he was breathing heavy and said, “Mom I need my haler cause my breath is heavy.” Ha ha! God bless!

Mix the crushed cookies with the butter and press the mixture into the bottom of a 9×13-inch Tupperware pan. In a separate bowl, whip the cream cheese until fluffy. Add the vanilla and stir it in. Add the condensed milk a little at a time, mixing each time. Add the chocolate syrup and coffee concentrate and mix again. Add the whipped topping. In another bowl, mix the instant pudding with the milk. Then add the pudding mixture to the cream cheese mixture. Pour the mixture into the pan, on top of the cookies. Pour chocolate syrup over the top length of pan. Swirl with a knife the other direction. 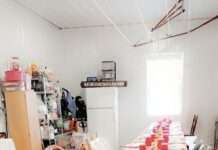 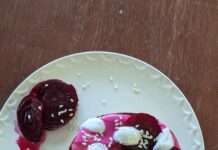 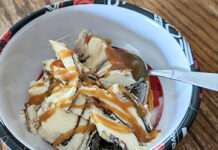