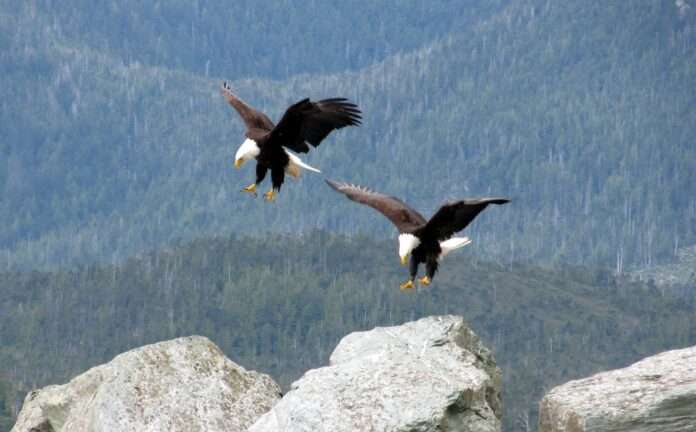 Michele McNulty with the US Fish and Wildlife Service office in Manhattan, Kansas told me they have been banding and studying bald eagles here in Kansas, mostly young fledglings, since 1989 when the first Kansas bald eagle nest was recorded at Clinton Lake, on the southwestern edge of Lawrence, KS. The first two eaglets banded from that nest were known as birds “A” and “B,” both thought to be males, and two years later, the mature male from that nest was trapped and banded as bird “E.” McNulty says that since then, the US Fish and Wildlife Service has banded just under 300 Kansas bald eagles.

In early 2019, the Kansas Dept. of Wildlife, Parks and Tourism (KDWPT) got a call from their Oklahoma counterpart asking whether they had by chance spotted a bald eagle that had “flown the coup” so to speak from an eagle research study being done there in Oklahoma. The KDWPT had never undertaken an official bald eagle research study of its own, so with that phone call still ringing in his mind, Chris Berens, Chief of the Ecological Section with KDWPT got the ball rolling, and with various energy developers and other partners, began discussing an official research study. The study moved forward, and the first eaglets were banded in May of 2021.

Berens, along with Zac Eddy, Terrestrial Ecologist with KDWPT, told me part of there responsibilities is to review how energy development projects in the state effect Kansas ecology and wildlife. This eagle banding project is a three-year study that will help them better understand how Kansas bald eagles make use of the airspace in their individual nesting ranges, thus helping them and their partners in the project make good scientific decisions as to how future energy projects effect bald eagles here.

Climbers or bucket trucks were used to gain access to eagle nests, and young birds, usually seven to nine weeks old, were lowered to the ground in bags and fitted with GPS transmitters and identifying numbered leg tags. The GPS units are very accurate and transmit flight direction, altitude and speed every three to five seconds, and transmit their location every 15 minutes when birds are roosted. Small solar packs affixed to the eaglet’s backs keep the lithium batteries in the GPS units charged, allowing them to last several years. Thirteen eaglets from both rural and urban areas in five counties were banded in this first year of the study. Berens and Eddy both agreed that given suitable space and habitat, there is a very good chance eaglets fledged here in Kansas will return to, or remain in Kansas to nest. US Fish and Wildlife data shows that males generally return to establish nesting territories within 100 miles of where they fledge.

The transmitter from the Oklahoma eagle was found somewhere in Barton County, minus its owner. This year’s count showed 188 confirmed active bald eagle nests here in Kansas, and two eaglets per nest is typical. Eagle “E,” that first mature male bald eagle banded by the US Fish and Wildlife Service at Clinton Lake in 1989, remained there producing offspring until 2018, when he disappeared and was replaced by an untagged male. Eagle “A” from that first Clinton nest was confirmed at Perry Reservoir in 1993 and is thought to be there still, having accounted for about 24 offspring as of 2018. Eagle “B” was confirmed at Hillsdale Reservoir in 1993 and is also thought to still be there, having accounted for about 44 offspring as of 2018. Using the US Fish and Wildlife Services estimate that 60 to 70 percent of first year eaglet chicks will not survive, that still makes bald eagles a success story here in Kansas as far as I’m concerned.

I knew our Kansas lakes, rivers and reservoirs were havens for wintering bald eagles, and I also knew we had a few nesting pairs, but who knew we had so many bald eagles that call our state home. After the last year-and-a-half, I’d say we could all use something to celebrate. And given the amount of animosity shown of-late toward our country’s flag and national anthem, I can think of nothing I’d rather celebrate than the success of our countries national bird, the bald eagle. Continue to Explore Kansas Outdoors!