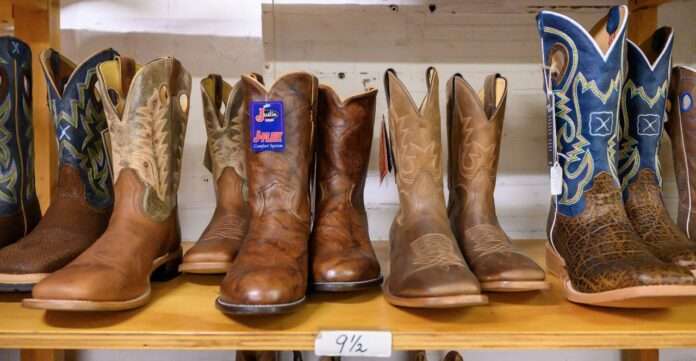 It’ll be a sad day for Emporia and folks throughout the Midwest.

“We are sorry and very sad after serving the area for so long,” proprietors Brad and Debbie Miller sentimentally shared.

“So many good people and their friendships we’ve made helping them is what we’ll really miss the most,” Brad insisted.

“Our whole family has been involved in the business over the years. Closing the doors will be really tough and bittersweet,” Debbie most solemnly added.

Actually the business was a major Emporia Commercial Street entity before the Miller family became owners.

“Ernie Ireland had his shoe shop at 422 Commercial, before selling it to my dad J.D. Miller,” Brad said. “I don’t know how many years Ernie was in business, but I used to hang out there after school. Ernie showed me how to do a few things, like replacing and polishing heels.”

“Owners of the building told us they were going to sell. But with all the empty storefronts, we didn’t think it would happen,” Brad said. “Then we were notified there was a new owner who wanted to start a dog care service. He was nice about it and gave us 90 days to liquidate our business.”

Closeout in progress, Jim’s Cowboy Shop has been very busy. “It’s not really what we wanted, but we’d been thinking about retiring after the passing of my parents. So the building being sold just forced us to do it,” Debbie said.

“Business has really been steady since people heard we were going to close. The building is emptying out very fast,” Debbie continued. “Customers seem to be interested in buying about everything we have, even the posters on the walls.”

First concern of those vast patrons from many miles around is: “Who’s going to repair our shoes and boots?” Brad quickly assures them, “I’m setting up shop in my garage, so I’ll still take care of your needs.”

The Millers got into the business when Brad’s dad prominent Emporia businessman-agriculturalist J.D. Miller bought the original shop.

“Dad was always kidding Ernie about buying him out. Then one day sure enough Ernie said he was ready to sell,” Brad remembered. “They had the deal all wrapped up, check signed and Dad was in the shoe repair business in 20-minutes.”
J.D. Miller wanted to start a western store. “So, Dad asked his friend Jim Fugate, my father-in-law, to partner with him,” Brad said. “They started Jim’s Cowboy Shop in 1975.

“Jim and his wife Bessie were very dedicated to their customers,” Brad continued. “They operated Jim’s Cowboy Shop until semi-retiring when Debbie and I took over the store.”
While Brad is acclaimed for his leatherwork, he credits Jim Fugate for skills above and beyond.

“I tell you Jim really got into shoe and boot repair. I’m not being prejudice, but there wasn’t anybody better than Jim was at that job,” Brad said. “Even boot salesmen commented that Jim did the best work they’d seen. Jim was asked to work for a major national boot maker, but he preferred to continue serving his hometown community.”

Over the years there were times the whole family pitched in to help. “In the 1980s when the ‘cowboy fad’ took hold, sometimes we all worked at the store,” Brad said. “The Christmas season was always the busiest of course. We’d stay open every night as the customers kept coming in.”

An important part of Jim’s Cowboy Shop for 17 years was the well-known cobbler and handyman Noble Thornton. “He did excellent work on men’s and ladies shoes. So people were depending on Noble as much as they were Jim and I,” Brad credited.

“Noble got into working with orthopedic shoes, which was really in high demand,” Brad continued. “Everybody enjoyed Noble, because he was so much fun to be around and was greatly missed when he passed away.”

Business has come not only from the entire Flint Hills and Kansas but throughout the Midwest. “We had customers ship us boots for repair from several other states.” Brad said.

“When international people came to town, they really got excited about the hats, boots, and cowboy apparel,” Brad said. “In the mid-’80s, a Japanese woman bought several thousand dollars of hats, boots and the like to ship back home.”

Four generations of the family have been important to Jim’s Cowboy Shop. “Our children April and Jake grew up here,” Debbie said. “Now their children are actually the fourth generation spending time in the store.”

Jake worked in the store a lot in earlier years. “He was a great salesman and good at shaping hats,” Mom Debbie said. “People often remember Jake practicing his rope tricks out in front of the store.”

After Jim and Bessie Fugate retired several years ago, they continued to be an important part of Jim’s Cowboy Shop. “Dad would come in to help catch up on leather work,” Debbie credited. “Mom was always ready to assist in the busy seasons or whenever asked.”

An era is coming to an end as Jim’s Cowboy Shop closes its doors. “Our family has so enjoyed working together in the Western industry meeting and helping so many people from everywhere.

“We treasure those experiences and acquaintances while supporting our community with sponsorships throughout the years,” Brad and Debbie Miller affirmed.

Jim’s Cowboy Shop owners Brad and Debbie Miller stand outside their store located at 312 Commercial Street in Emporia. The longstanding business is shuttering its doors at the end of the month. (Photo by Tim Mohn/The Emporia Gazette.)

Jim and Bessie Fugate operated Jim’s Cowboy Shop in Emporia for many years.

A full line of western wear is offered at Jim’s Cowboy Shop in Emporia. (Photo by Tim Mohn/The Emporia Gazette.)

This well-used workstation has aided in the repair of many leather boots and other items over the years at Jim’s Cowboy shop. (Photo by Tim Mohn/The Emporia Gazette.)

Important To Save Information