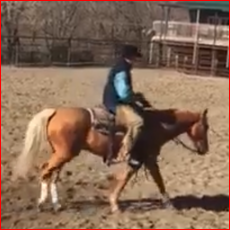 A movie star has become a working ranch horse.

Jessies Sugar Rey, better known nowadays as Yellowstone, literally made a name for himself in the television series “Yellowstone.”

Like none too few actors, the 13-year-old palomino gelding’s movie career was somewhat short lived.

However, Yellowstone, referred to here-forward as Jessie, has now found his true calling. He’s a most dependable mount for Jim Quinn at the Quinn Red Angus operation near Chanute.

Jessie acted uncredited in the second episode of the television drama on June 27, 2018. More than 2-million viewers watched “Kill The Messenger.”

Written and directed by Taylor Sheridan, “Yellowstone,” the TV show, stars Kevin Coster. For those unfamiliar with the series, it follows the conflict among a cattle ranch, Indian reservation and land developers.

In February 2020, Paramount Network renewed “Yellowstone” for a fourth season, ahead of its third season premiere.

“Joe has contacts throughout the country from his extensive training and showing career,” said Mary Ubel at the 2UW. “Joe was happy to locate Yellowstone for Jim Quinn. Then Joe tuned up the beautiful gelding before sending him to Neosho County for his profession as a ranch horse.”

The 2UW Ranch is now jointly operated by Joe Ammann and Mary Ubel. “We got married November 29, 2020,” Mary Ubel announced. “November 29th was the same day as my dad and mom, Walter C. Ubel and Barbara D. Ubel, were married many years ago. It is exciting.”

Additional information can be found on the website www.joeammanncuttinghorses.com as well as at www.2uwbrushcreekranchks.com.

CUTLINES
Jessies Sugar Rey, better known nowadays as Yellowstone, literally made a name for himself in the television series “Yellowstone.”

Joe Ammann, trainer at 2UW Brush Creek Ranch near Westmoreland, works with Jessie Sugar Rey, aka Yellowstone. The palomino gelding is now a cow horse for Jim Quinn at the Quinn Red Angus operation near Chanute.

REFLECTIONS ON OUR BIRTHDAY