The 2021 Farm Family Award went to Chad and Cassondra Basinger and their children from Pretty Prairie.

To celebrate, the group brought in nationally-known ventriloquist Greg Claassen. Although Claassen has toured throughout North America for more than three decades and performed at Walt Disney World and Silver Dollar City, he grew up on a farm in Whitewater. Because of his upbringing, he added his knowledge of both farming and central Kansas into his act. In 1976, he told the crowd, he won a KFB award for his act.

“It is because of Kansas Farm Bureau that I am here tonight,” he said. 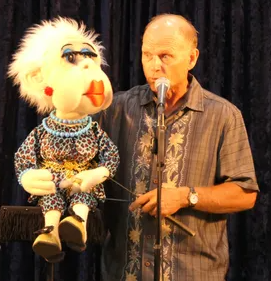 Claassen brought out his ‘partners’ Pearl Higgenbottom and Harley McCoy to help him on stage. He also brought up board member Austin Schweizer, put a mask on him and spoke for him, as if Schweizer was his dummy.

The audience laughed heartily with Claussen, Higgerbottom and McCoy as they spoke of corn between their ears, Nickerson and Higgerbottom’s ex-boyfriends.

Higgerbottom told one audience member that he had a nice shirt, except, she said (without Claassen moving his lips), “You hang onto that thing. It’ll come back in style.”

In addition to the entertainment and dinner, several farm families were honored. As this group did not have a meeting last year due to COVID-19, some of these awards were for two years.

The Bureau awarded V.J. and Susan Blubaugh the Century Farm Award for 2021 and Ray Seidl this same award for 2020.

Nathan Schmidt and Alex Papenfuss (not in attendance) were awarded scholarships. Schmidt plans to attend Hutchinson Community College and major in Ag Diesel, while Papenfuss will major in industrial engineering at Kansas State University.

2022 Cattle U & Trade Show offers fun for the whole family 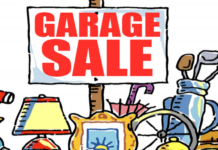