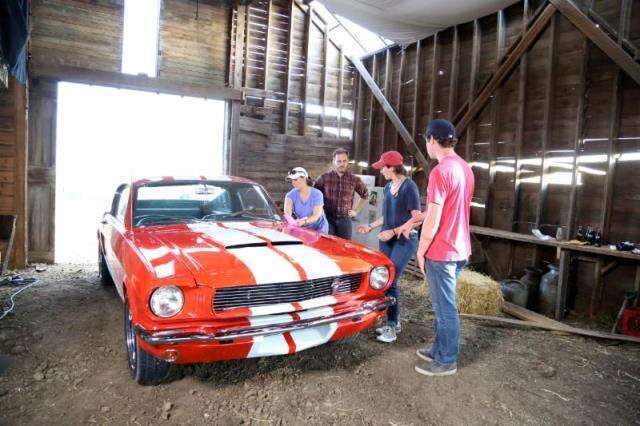 In January of 2014, Kirkwood responded to e-blasts put out by the Kansas Barn Alliance and the Kansas Sampler Foundation on behalf of Lowry. Lowry was looking for a particular barn and setting to use for a commercial featuring Coca Cola and Ford products.

In his presentation, Kirkwood revealed that a 1907 barn near the unincorporated town of Upland in northern Dickinson County was the chosen barn. Currently owned by Lonnie Heigele of New Cambria, the land around the barn had been farmed by Kirkwood’s in-laws, the Schlappi’s, decades ago and Kirkwood thought it fit Lowry’s requirements. Lowry said he received over two thousand barn suggestions from the e-blast but the Upland barn and Kirkwood’s willingness to prepare it made the difference.

Kirkwood used a PowerPoint to tell about the 500 man-hours it took to transform the barn. In all, about 100 Kansans participated in fixing the barn, building a driveway through the wheat field, landscaping the area and doing whatever it took to accommodate Lowry and Rafferty. Certain vehicles were needed for the commercial and Kirkwood found them. Cindie Bailey of Hoyt provided a restored 1965 Ford Mustang, Nathan Liska of Lawrence had the beat-up 1965 Mustang, and Ron Scripter of Abilene owned just the right 1970 blue Ford truck.

Bruce Silkey of Lecompton was chosen to play the Grandpa in the commercial. Seven-year old Kaeden Saunders from Wisconsin played the grandson.  Glenn Davis, an actor with Abilene’s Great Plains Theatre Festival from North Hollywood, CA played Kaeden’s character as the grown-up grandson.

On May 30 and 31 the filming took place. In all, two hours of footage were shot for the 60-second commercial.

Kirkwood said he was willing to go to all the work when he found out that producer Lowry was a sophomore at New York University and his partner at Flex Collective, LLC, Rafferty, was a junior at Syracuse. Lowry explained the story he wanted to convey in the commercial and Kirkwood was eager to help make it happen.

Lowry said, “This was an incredible experience in Kansas. All the generosity and friendliness was beyond my wildest comprehensions. The outpouring of help and support was overwhelming. We’ll come back to Kansas.”