Declassified documents reveal Black Sea’s history as ‘forbidden border zone’ during Cold War
LAWRENCE — The Black Sea remains one of the most prized and contested spots on earth. A University of Kansas history professor’s new article, “The Black Sea Coast as a Landscape of Cold War Intelligence,” explores its development as a locale for tourism, commerce, military activity and intelligence gathering, based on newly declassified KGB records from Ukraine and Georgia.

KU, TFI partner to reduce instances of children running from foster care
LAWRENCE — Earlier this month, TFI Family Services and the University of Kansas provided legislative testimony about their recent partnership to address the issue of children missing from foster care placement to the joint Kansas Child Welfare Oversight Committee. TFI reported to the legislative committee that they implemented Placement Stability Team Decision Making in January 2022 to hear from both youths and their families in making placement decisions. As a result, TFI has seen positive progress in reducing frequency of missing youth from placement.

Contact: Jon Niccum, KU News Service, 785-864-7633, [email protected]
Declassified documents reveal Black Sea’s history as ‘forbidden border zone’ during Cold War
LAWRENCE — It was known in antiquity as “the inhospitable sea.” In modern times, it’s been called the Soviet Riviera, famed for its subtropical climate.
The Black Sea remains one of the most prized and contested spots on earth.
According to Erik Scott, associate professor of history at the University of Kansas, the region has served as both a place where Soviet elites vacation and as a “forbidden border zone.” Recently it’s been a key battleground in Russia’s war against Ukraine.
“Control of the coastline is at the center of the conflict,” Scott said.
Scott’s new article “The Black Sea Coast as a Landscape of Cold War Intelligence” explores its development as a locale for tourism, commerce, military activity and intelligence gathering, based on newly declassified KGB records from Ukraine and Georgia. It appears in Kritika: Explorations in Russian and Eurasian History.
“The Black Sea is seen as a key strategic territory by Russia and also as vital for Ukraine’s economy and its connections to the outside world. There’s so much grain going out from Odesa to the rest of the world, and it’s some of the most coveted real estate in the region,” he said. “By all accounts, Russia is trying to cut Ukraine off from the Black Sea. So in many ways, the battle centers around access to the Black Sea for Ukraine.”
Nearly twice the size as the Great Lakes, the Black Sea bounds Russia, Georgia, Ukraine, Bulgaria, Romania and Turkey. Scott said the one word to describe the area is “diversity.”
“It’s diverse in terms of the many different populations that live along it. It’s very complex because of all the states that border it. It’s ecologically diverse as well; it has subtropical beaches but also mountains, swamps and marshland,” he said.
The territory boasts a rich history (it’s where Jason and Argonauts were fabled to have journeyed to find the Golden Fleece). But in the modern age, the Black Sea has repeatedly found itself at the center of international politics.
“There was a perception during the Cold War that the Soviet Union was closed off from the rest of the world. I tried to basically show how borders and bridges to the outside world coincided along the Black Sea coast. How the state created both openings and closures on this landscape,” he said.
Scott made several research trips to Tbilisi and Kyiv to view the KBG archives. He also traveled to Russia to look at other archival collections. Since the Black Sea is touched by all these states, materials are split among various countries.
“The KGB records are really rich,” Scott said.
“Some of the investigative files for unauthorized border crossers consist of multiple bound volumes of interrogations, informant reports and biographical materials. The KGB sifted through everything, especially if someone fled. They really wanted to understand why they fled — not only who needed to be punished but what needed to be done to build up the border to prevent further flight.”
People often speak about the KGB in hushed tones, as if the organization was a mixture of Big Brother and SPECTRE. How does Scott characterize its effectiveness during the Cold War?
“I was surprised at how the Soviet border regime was at once extremely sophisticated, in that it had extensive surveillance systems and informant networks, but also how ramshackle it was in some portions. When viewed up close, you see how rickety the Iron Curtain was … but yet how pervasive it was,” he said.
While the KGB was quite formidable — and it had wide-ranging authority and very little oversight — Scott notes one crucial factor that made it less than all-powerful.
He said, “It’s a giant bureaucratic organization with multiple divisions. Within those divisions, there are different departments. And then there are different branches of the KGB: Georgian KGB. Ukrainian KGB. They’re all supposed to report upward, but there was a tendency for officers on the ground to craft their reports based on what their superiors in Moscow wanted to hear.”
Scott has taught at KU since 2012 as an expert in Soviet and global history. He also serves as director of KU’s Center for Russian, East European & Eurasian Studies and is the editor of The Russian Review. He is fluent in Russian and Georgian.
“If we want to understand why Russia invaded Ukraine, it’s really hard to grasp that without understanding the history, politics and various strategic designs Moscow has long had on the Black Sea region,” Scott said.
“I also think we live in a world of borders. For a long time, the Iron Curtain was looked at as some kind of aberration. But I tried to put it in a comparative context, where it can be seen as a set of strategies for managing migration that anticipated so many things that are still done today.”
-30-
————————————————————————
The official university Twitter account has changed to @UnivOfKansas.
Refollow @KUNews for KU News Service stories, discoveries and experts.

LAWRENCE — Bruce Lieberman, professor in the University of Kansas Department of Ecology & Evolutionary Biology and senior curator in the Division of Invertebrate Paleontology at the Biodiversity Institute & Natural History Museum, has been named director of the KU Paleontological Institute. He previously served as interim director from 2005 to 2007.
The institute, a unit of the KU Biodiversity Institute, produces the Treatise on Invertebrate Paleontology, a renowned source of current invertebrate paleontology knowledge with over 50 volumes published since 1953. The institute, in partnership with the KU Libraries, also publishes the monographic series KU Paleontological Contributions.
The Paleontological Institute was previously under the direction of Paul Selden, Gulf-Hedberg Distinguished Professor of Invertebrate Paleontology, from 2007 until his retirement in 2020. Bill Ausich of the Ohio State University’s School of Earth Sciences served as interim-chief-editor from July 2020 through July 2022.
“Professor Lieberman is a world expert on invertebrate paleontology, with extensive experience managing projects and an impressive track record of funding by federal agencies,” said Jorge Soberón, University Distinguished Professor and director of the Biodiversity Institute, who co-chaired the search committee. “He’ll maintain the tradition of the Treatise but has an exciting vision for moving it from a traditional monograph format to a digital resource for data.”
About Bruce Lieberman
Lieberman is a paleontologist and evolutionary biologist whose research focuses on macroevolutionary patterns and processes using the fossil record as well as the evolutionary history of invertebrates.
Lieberman joined the KU faculty in 1998. He has been a senior curator at the Biodiversity Institute since 2007 and a professor in the ecology & evolutionary biology department since 2012. He was a program director in the Division of Environmental Biology at the National Science Foundation from 2020 to 2021.
He received his doctorate in geological sciences from Columbia University in 1994, where he also earned his master’s degree in 1991. He earned his bachelor’s degree in geological sciences from Harvard University in 1988.

Contact: Valerie Hawley, School of Social Welfare, 785-864-3804, [email protected], @KUSocialWelfare; Taylor Forrest, TFI Family Services, [email protected]
KU, TFI partner to reduce instances of children running from foster care
LAWRENCE — Youth in foster care run away from placements for many reasons, but it almost always boils down to the need for family, connection, belonging and normalcy.
Earlier this month, TFI Family Services and the University of Kansas provided legislative testimony about their recent partnership to address the issue of children missing from foster care placement to the joint Kansas Child Welfare Oversight Committee.
During this testimony, TFI and KU reported how they worked to identify and mitigate the factors that contribute to a youth’s decision to run from foster care placement.
“The youth we interviewed were very clear that when they are provided with the supports necessary to sustain relationships important to them, when they receive high-quality care in placements that feel like a good fit for them, and when they are allowed voice and choice in their care, they are more likely to remain stable in placements,” said Kaela Byers, associate research professor of social welfare and principal investigator of the study.
TFI is utilizing the recommendations and results from KU’s School of Social Welfare research to make changes in practice to build protective factors and address risk factors. TFI reported to the legislative committee that they implemented Placement Stability Team Decision Making in January 2022 to hear from both youth and their families in making placement decisions. As a result, TFI has seen positive progress in reducing frequency of missing youths from placement. Recently, Area 8 went 53 consecutive days with zero children missing from placement.
“One child missing from placement is one too many,” said Rachelle Roosevelt, senior vice president of TFI. “That’s why we are working continuously to address this dire issue. TFI has seen significant improvement, and we will continue to work in that direction to promote child safety and well-being. That is always our top priority.”
TFI has also seen additional positive results in case management in areas 4 and 8. Area 4 comprises most of southeast Kansas. Area 8 includes Barber, Butler, Cowley, Elk, Greenwood, Harper, Kingman, Pratt and Sumner counties.
1. Area 4 and Area 8 have seen a reduction in the number of children entering foster care.
2. Last quarter, 36.7% of children in Area 4 were kept in their home school when placed in care, while 32.1% of children in Area 8 were kept in their home school (goal 25%).
3. Area 4 has exceeded their goal of having more than 78% of children placed with at least one sibling.
4. Area 4 and Area 8 have exceeded their goal of having more than 50% of kids in kinship placement. 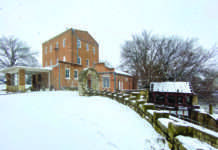