“I’m dedicated to my job,” Kerschner said. “I like taking pictures that will be memories for years to come.” 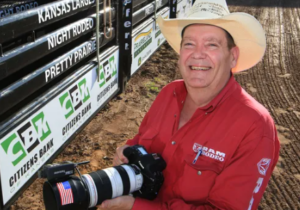 This year will be Kerschner’s 20th year at the Pretty Prairie Rodeo, but he began at 9 years old when his grandmother gave him a Kodak Brownie.

Kerschner said he began taking photos of trees, plants, pets and family members, but his passion for photography grew after graduating from Buhler High School in 1977.

“I was taking pictures of contestants at a local rodeo somewhere in Reno County, and they nicknamed me the photo cowboy, and that’s where it took off from there,” Kerschner said.

Kerschner recalled his beginnings in film photography when he would capture images on the industry-standard, 35-millimeter film rolls, develop them in a dark room and sell pictures to customers.

Until the 1990s and early 2000s, Kerschner used film cameras until he purchased his first digital camera and switched to the next era of photography.

“The transition took a while to get used to because the computers really weren’t up to snuff yet,” Kerschner said. “They couldn’t handle all the images, and I had to buy a lot of storage and hard drives because I had file cabinets upon file cabinets of film.”

Kerschner said he continued capturing images of rodeos and other events in Reno County for the Professional Rodeo Cowboys Association, PRCA, and other companies.

In 2009, Kerschner traveled to Spain with PRCA to photograph the first American rodeo in Europe.

“We traveled the whole country of Spain — Madrid, Barcelona, all of those places,” Kerschner said. “They put on rodeos in bullfighting arenas, and I documented how that was done. I loved doing that and being recognized as a photographer that’s good enough to go do that.”

“I loved watching the image come on the paper,” Kerschner said. “That intrigued me how that white piece of photographic paper put in the solution, and it just comes alive.”

Over time, he traveled across the country and occasionally outside the U.S. border but always called Reno County home.

“Reno County is just home. I lived in Greeley, Colorado, for a while and came back,” Kerschner said. “It just didn’t feel right, so I came back here.”

For Kerschner’s 20th year, he continued to capture images at the Pretty Prairie Rodeo, catching rodeo competitors in events such as bull riding, barrel racing and roping throughout the weekend.