GENESEO ­– While many people will be focused on fireworks and the nation’s independence day, the residents of Geneseo in rural Rice County, population 236, are thinking more otherworldly.

A festival was on Saturday outside the Geneseo Museum to mark “World UFO Day.”

The occasion, said Jim Gray, president of the museum at 907 Silver St., is to celebrate the unique collection of the owner of the residence-turned-museum dedicated to his belief in extra-terrestrials and their visits to Earth.

Dr. Elmer D. Janzen was a once celebrated native considered a bit of a genius, Gray said.

He was a chiropractor and practitioner of naturopathy, a licensed minister and a graduate of Moody Bible Institute of Chicago. He taught braille, was an auctioneer and a recognized ventriloquist.

He loved dogs, children and sharing his knowledge.

Gray, 72, recalls Janzen visiting his grade school to present a talk on astronomy – and his going into a lengthy presentation instead on UFOs and alien visitors.

“It was a meaningful night for me,” Gray said, recalling decades later his immediate fascination.

However, Janzen became less celebrated after that and a bit of an embarrassment to the community.

That didn’t deter Janzen’s beliefs, his effort to collect information and artifacts on the subject and to spread the message reportedly coming from the space visitors — that atomic testing by the U.S. was threatening to impact the world’s polarity and send ripples into the solar system.

A teacher and auto mechanic, Dean believed extra-terrestrials were living among people on Earth and professed Christianity. He claimed at the time, in the late 1950s, that there were at least 10 of these beings living in Hutchinson, Gray said.

“The ones (extra-terrestrials) they had contact with were human in appearance, and they (the ETs) impressed upon them that they were very aware of the Christian faith and were believers in the same things, though they said we didn’t really understand the depth of what that meant,” Gray said. 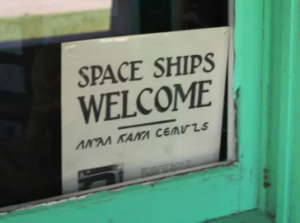 Dean created a sign for people to put in the rear window of their vehicle — now displayed in the museum window — stating “Space Ships Welcome,” with what appears to be Cyrillic writing below the sentiment to make the beings feel welcome.

Dean took Janzen to a convention on extra-terrestrials in Mountain View, Mississippi, in 1957, where they met others, including Buck Nelson, who claimed to have been taken up into spaceships from Jupiter and Venus.

Janzen returned to the convention annually and began collecting original drawings from those individuals, detailing the ships. George Adamski, Dino Kraspedon of Brazil and Reinhold Schmidt drew the pictures.

He also collected more than a dozen books and monographs written at the time on the subject, including some authored by Dean and Nelson.

Titles on display at the museum include Dean’s book, “Flying Saucers and Scriptures,” printed in 1964 by Vantage Press, and “Flying Saucers Up Close,” published in 1970.

Those drawings, newspaper clippings, photographs and books make up most of the collection in a room of the museum dedicated to UFOs.

They also have about 8,000 slides and many reel-to-reel recordings they are now having converted onto CDs.

The remainder of the museum displays artifacts from Janzen’s life and the community, including senior pictures and other memorabilia from the high school, which closed in 1980, and local war veterans information.

“Dr. Janzen’s original intent was to preserve the history of Geneseo, and then he began to display his collection there,” Gray said.

He never married, and he lived with his parents. When his mother died in 1964, he started creating the museum.

Other items on display include his ventriloquism dummies, a stuffed dog named Fritz that died in 1950 and another dog preserved with just its head and hide.

Janzen ran the museum from 1964 to 1976. When his health started failing, he donated the house and its contents to the city. He died in 1977.

“It (the museum) fell into disrepair,” Gray said. “In 2018, we reorganized and formed a new board to restore it. It’s a wonderful board, and they’ve done some great things.”

That included the decision to promote Janzen’s unique collection outside of the community.

The museum is open on the second Saturday of each month. Other times, those who’d like to visit can call Gray at (785) 531-2058 to arrange an appointment.