“The Kansas Kid” was a member of United States’ team competing at the recent major bull riding event in Mexico.

“It was an opportunity of a lifetime I just couldn’t pass up and a truly unbelievable experience,” exclaimed Devin Hutchinson.

The Professional Bull Rider (PBR) from Emporia competes in events throughout this country.

“I was riding in Arkansas over the fourth of July when I broke my hip,” Hutchinson said.

A career setback, but while recuperating “The Sunflower Kid,” as Hutchinson’s also known, was invited to international competition.

The 27-year-old, five-foot-eleven, 150-pounds Flint Hills cowboy credited his participation in the Santa Fe Rodeo Circuit for getting the invitation.

In May, Hutchinson was selected for the PBR World Finals as an ABBI rider representing American Bucking Bulls, Incorporated.

“That was special but to represent the United States at a major event in Mexico is beyond expectations,” he admitted.

“We are bull riding friends which made it especially meaningful for us to represent the United States team,” Hutchinson said.

Competition was at Puerto Vallarta, beach resort city population exceeding 250,000, on the Pacific Ocean in the Mexican state Jalisco.

While Eagleburger and Calvert flew to Mexico, Hutchinson traveled the 24-hour drive by car.

“I accompanied the ‘8 Segundos,’ Mexico’s premier country band,’ which was a wonderful experience in itself,” he said.

“They are a unique Mexican country group which matched similarly with my up and down lifestyle,” Hutchinson said. “Being a bull rider is actually similar to how rock and roll bands live.”

The band comprised of the Olivas brothers and their drummer friend Reyna Diaz owns the bull riding tour. “Torros En El Infierno Company was the tour sponsor who paid our expenses,” Hutchinson said.

Brazil, El Salvador, Puerto Rico, and Guatemala were also represented on Mexico’s team. “There were 50 bull rides in the event, with 25 Mexican style rides and 25 American style rides,” Hutchinson explained.

Of course, the U.S. team rode with bull ropes and spurs. However, Mexican bull riders use “no hands, and hooks for spurs.”

Jaripeo is the technical title for Mexico’s bull riding competition. “It developed in the 16th century and originally involved riding fighting bulls to the death,” Hutchinson related. “Mexico’s bull riding events later evolved to where contestants attempt to ride bulls until the animals tire and stopped bucking.”

The U.S.-Mexico bull riding event did not feature the rankest bulls in the sport, according to Hutchinson.

“These bulls weren’t as judicious, older rodeo bulls zoned out from earlier professional careers,” Hutchinson said. “Still the bulls weren’t easy either. It was a lot of tension representing the United States against Mexico.”

Upon the United States team’s arrival, their foreign rivals were not the most receptive congenial, according to Hutchinson. “But by the time the competition was over, we had become acquainted and were friends,” he added.

No overall team scores were tabulated, but the United States team did quite well, Hutchinson insisted. “Dakota had a high marked ride on Outlaw Shakedown,” he said. “Wyatt and I made qualified rides on our bulls, but they weren’t as rank as some of the rest.

“It was the first bull I’d mounted since I broke my hip. So, I was a little cautious, but everything went just fine,” Hutchinson added.

Beyond the bull riding tour, the public relations and goodwill that came out of the Mexico trip were very significant.

“We were there for two weeks. So, it was special visiting the area and seeing the Mexican traditions,” Hutchinson said. “We had a lot of interviews on television, radio, and other media.

“Everybody was so congenial, friendly and helpful,” he continued. “The Mexican food was delicious. It was the real thing, nothing like Mexican food in this country.”

Back home now continuing to recuperate, Hutchinson said, “I probably won’t be riding bulls for another month or two.”

A powerline worker for the past six years, Hutchinson is starting back fresh in that professional just like with his bull riding. “I’ve been called to assist following the hurricane in Florida, and I’m on my way there,” he noted.

On the rodeo sidelines after his July accident gave Hutchinson time to think, meditate, and pray. “The injury was its own blessing really. Lots of things about the past, present, and future are considered when that’s all there is to do,” he said.

“My two-year-old son Stetson is really the most important to me now,” Hutchinson said. “He’s an adventurous little fella who helps make me a better person, too. I hope he grows up with dreams to be a cowboy. But I’ll do whatever I can to help him in every way whatever he does.”

Personally, Hutchinson has set goals to improve himself spiritually, be a better father, stronger person, and ride more bulls.

“I don’t focus on what bull I’m up against. I focus on my goals and try to ignore the rest,” Hutchinson insisted. “Sometimes life is all about risking everything for a dream no one can see but you.” 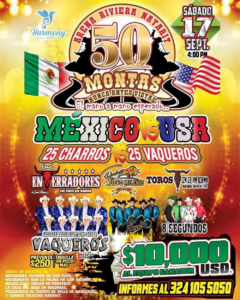 A colorful poster printed in Spanish promoted the recent international bull riding event in Mexico where the United States was represented by a team of three cowboys from Kansas and Missouri. 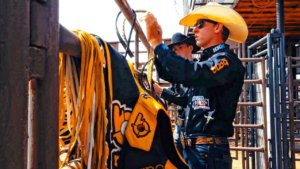 Flint Hills cowboy Devin Hutchinson is a Professional Bull Rider (PBR) competitor who was one of three cowboys on the team representing the United States at a recent event in Mexico. 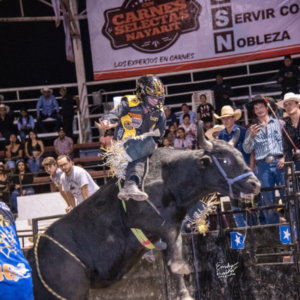 Dead Eye of En Erradores Rodeo Company was a challenge won by Flint Hills cowboy Devin Hutchinson when he was on the United States team at an international bull riding event in Mexico.