After a life-threatening injury, Kansas cattle rancher invents product to help others in same circumstance. After almost dying from a cattle accident, one rancher becomes ingenious.

With more than 2 million fulltime production workers in agriculture, there is sure to be a lot of accidents from both machinery and livestock.

In 2019, more than 400 farmers and farm workers died from a farm-related injury, according to the Centers for Disease Control and Prevention. This makes the fatality rate among this group 19 out of 100,000, the CDC website explained.

Earlier this year, cattle rancher Loran Gottschalk of Ellis almost became a statistic. He was helping with a friend’s calf and her mother cow was mad and confronted him.

“It crumpled me up like a beer can,” Gottschalk said. “We didn’t know if I was going to make it.”

After leaving the hospital, Gottschalk decided to invent a gadget to help himself and other farmers. He focused on an aluminum catcher that he could lower over the calf from the safety of a Utility Terrain Vehicle.

“A UTV-mounted calf catcher cage is lowered over the calf to protect cattlemen from a mother cow while working calves,” Gottschalk said.

The basket has openings for both the rancher and the cow. The rancher can check the calf and tag it or insert vaccines, and the mother can watch and nuzzle her young one.

“If the cow is there, they can lick the calf,” Gottschalk said. “It doesn’t hurt them at all.”

In addition, Gottschalk said the lightweight unit reduces animal and human stress, can be customized and is easy to install. Because the units have wheels, they will withstand difficult terrain. 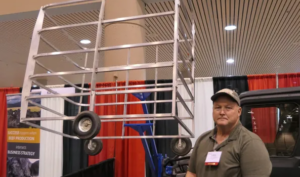 But because it can be operated by one worker, he said, the driver needs to be a good driver.

Gottschalk started his company, Fast Catch, in January and began constructing each cage by hand. He said the “nest” has received a lot of attention from farmers. 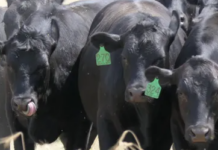 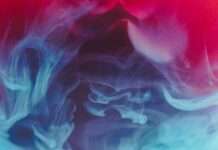