Selection of the optimal planting date is one of the most critical factors in the decision-making process for producers. In making this decision, producers should consider soil temperatures rather than just calendar dates. Soils have been slow to warm this year, due to the wetter-than-normal conditions during the fall and winter, as well as the cooler-than-normal temperatures that have lingered into April. 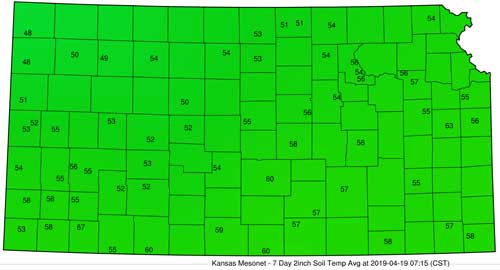 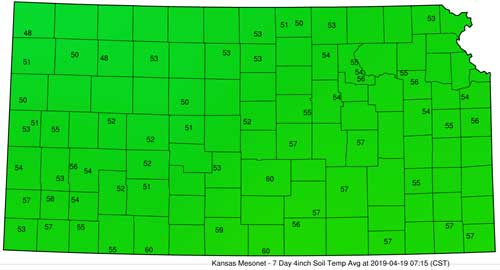 Daily soil temperature variation within the last week (7-day report) was recorded across Kansas for several locations (Figure 2), presenting variations around 20 degrees F. There has been a fairly steady warming pattern across the state, with the steepest increase visible in northeast Kansas at the Hiawatha station.  Soil temperatures were above 60 degrees F by Wednesday, April 17, in several locations, before dropping to at or less than 45 degrees F on Friday, April 19 (Figure 2). 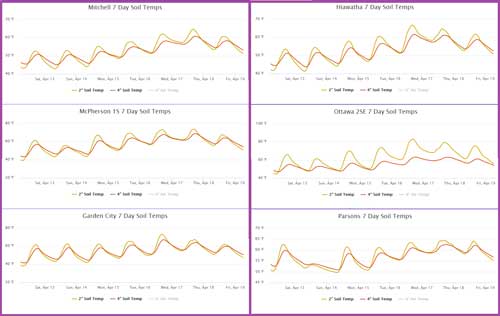 Soil temperatures at the 4-inch depth during the first 24-72 hours after planting are critical. It is during this window that the kernels imbibe water and begin the germination process. Kernels naturally swell when hydrating – taking in water. If the cell tissues of the kernel are too cold, they become less elastic and may rupture during the swelling process, resulting in “leaky” cells. Injury symptoms may include swollen kernels that fail to germinate or aborted growth of the radicle and/or coleoptile after germination has begun.

Chilled seedlings may also be more sensitive to herbicides and seedling blights.

Before making any decisions, fields should be scouted 4-7 days after the cold occurred since the extent of the damage and potential for new growth will be evident during this time. 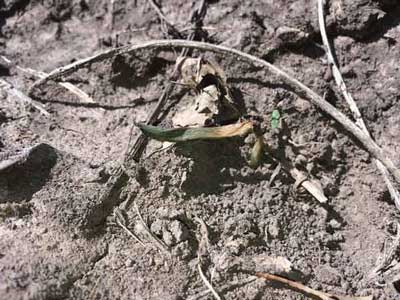 Producers should consider all these factors when deciding on the planting time. More information about the planting status of summer row crops will be provided in upcoming issues of the Agronomy eUpdate. Stay tuned!