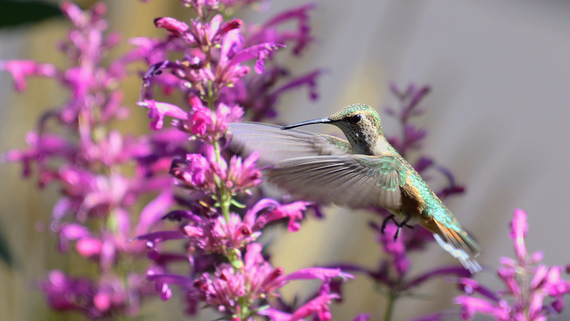 A broad-tailed hummingbird feeding on Agastache by Ryan Moehring/USFWS

Love is Wild: Mating and Dating in the Natural World

With Valentine’s Day just around the corner, it’s the perfect time to brush up on the birds and the bees… pollinators, that is! If you plan on celebrating the holiday by eating chocolate or other sweet treats, chances are you should thank a pollinator. Animals pollinate over 75% of flowering plants, while 35% of food crops worldwide depend upon animal pollinators, which provide tens of billions of dollars annually in ecological services.

Many of our favorite foods and sweet ingredients – including almonds, apples, bananas, blueberries, cherries, and coffee – depend upon pollinators. Pollination is the process by which flowering plants reproduce. Animals are often an integral part of the equation; they help spread pollen from the male to female parts of the same or a different flower, leading to fertilization and the growth of fruit and seeds. (Some plants depend upon wind, water, or self-pollination to reproduce.)

Pollinators are an incredibly diverse group. There are about 4,000 bee species in the United States alone! Butterflies, bats, beetles, birds, moths, and even lizards pollinate certain plants. Discover how you can support pollinators, such as the imperilled monarch butterfly, by planting a native plant garden, avoiding or limiting pesticide use, and supporting healthy native habitats.

Looking for other ways to celebrate the season of love? Explore heart-shaped nature seen on national wildlife refuges and share your own images on social media using the hashtag #WildlifeRefuge. You may also lek learning about the seductive strut of the greater sage-grouse or checking out committed wildlife that mate for life. Lastly, delve into would-be wildlife dating profiles or settle down to survey seven solidary wildlife that don’t mind being alone – hey, not everyone’s into the mushy stuff! 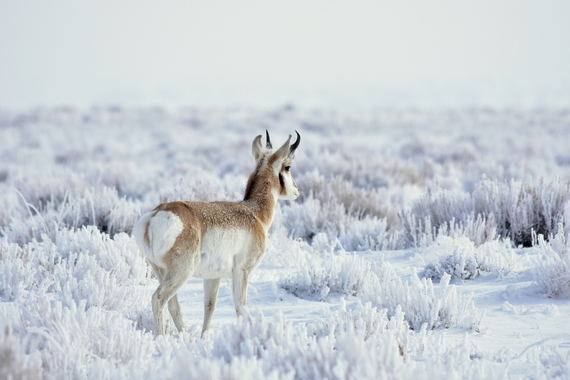 Today marks the start of the 2018 Olympic Winter Games. Humans are capable of extraordinary physical feats, yet wildlife exhibit stellar talents too!

For instance, pronghorn antelope are the fastest land mammals in North America, reaching speeds over 50 miles per hour; only the cheetah is faster. Meanwhile, peregrine falcons are aerial champions, diving through the air at over 200 miles per hour to catch prey. Monarchs are marathoners; the tenacious travelers journey over 3,000 miles to reach Mexico for winter. Pallid sturgeon are hydrodynamically adapted to their river habitats, allowing them to hold their ground with minimal effort; they also have whisker-like chemical receptors (called “barbels”) that act like taste buds to help them find food in muddy waters.

A variety of animals are well-suited for cold climates of the western United States too: lynx have large, snowshoe-like paws that allow them to walk atop snow and pounce on their prey (hares!); painted turtles can endure under frozen pond water, absorb air through their skin, and even temporarily withstand conditions with little to no oxygen; some frogs create an antifreeze-like response to survive frigid conditions; and birds stay warm using many methods, such as fluffing feathers, shivering, roosting, and cuddling.